The Fed is tasked with keeping prices stable, unemployment low and long-term interest rates moderate. The monetary alchemy with such unstable elements is coming under review.

The U.S. Federal Reserve can hardly be blamed for thinking about moving its monetary policy goalposts, or at least the one targeting a specific inflation level. After all, if the Fed has long been unable to consistently spur annual inflation to run at the desired 2% pace, it’s sensible to examine why, consider whether an alternative inflation-targeting framework might make sense, and perhaps ask whether its dual, if not triple mandate, is coherent and achievable.

The Fed’s monetary policy coterie, the Federal Open Markets Committee (FOMC), held a June 4-5 conference at its Chicago branch to review monetary policy since the Financial Crisis. Stable prices are one statutory objective Congress mandated in the Federal Reserve Act. “Maximum employment” and “moderate long-term interest rates” are the other two. How has the U.S. monetary authority done?

On the surface, not bad. U.S. unemployment topped out at 10% in 2009 and has since fallen to less than 4% as the Fed slashed its key rate to near zero and kept it there till late 2015, while more than quintupling the size of its balance sheet through asset purchases known as quantitative easing (QE).

But wage growth has averaged just 2.3% annually over the period, while the core Personal Consumption Expenditure Index, the Fed’s preferred inflation measure, has averaged a below-target 1.6% yearly. Worryingly, both market- and survey-based inflation expectations have also been steadily coming down. So has the Fed’s own median long-term neutral rate projection, at which unemployment and inflation are thought to be optimally balanced: the current 2.5% upper bound of the Federal funds rate stands just a quarter-point below the long-run neutral projection. 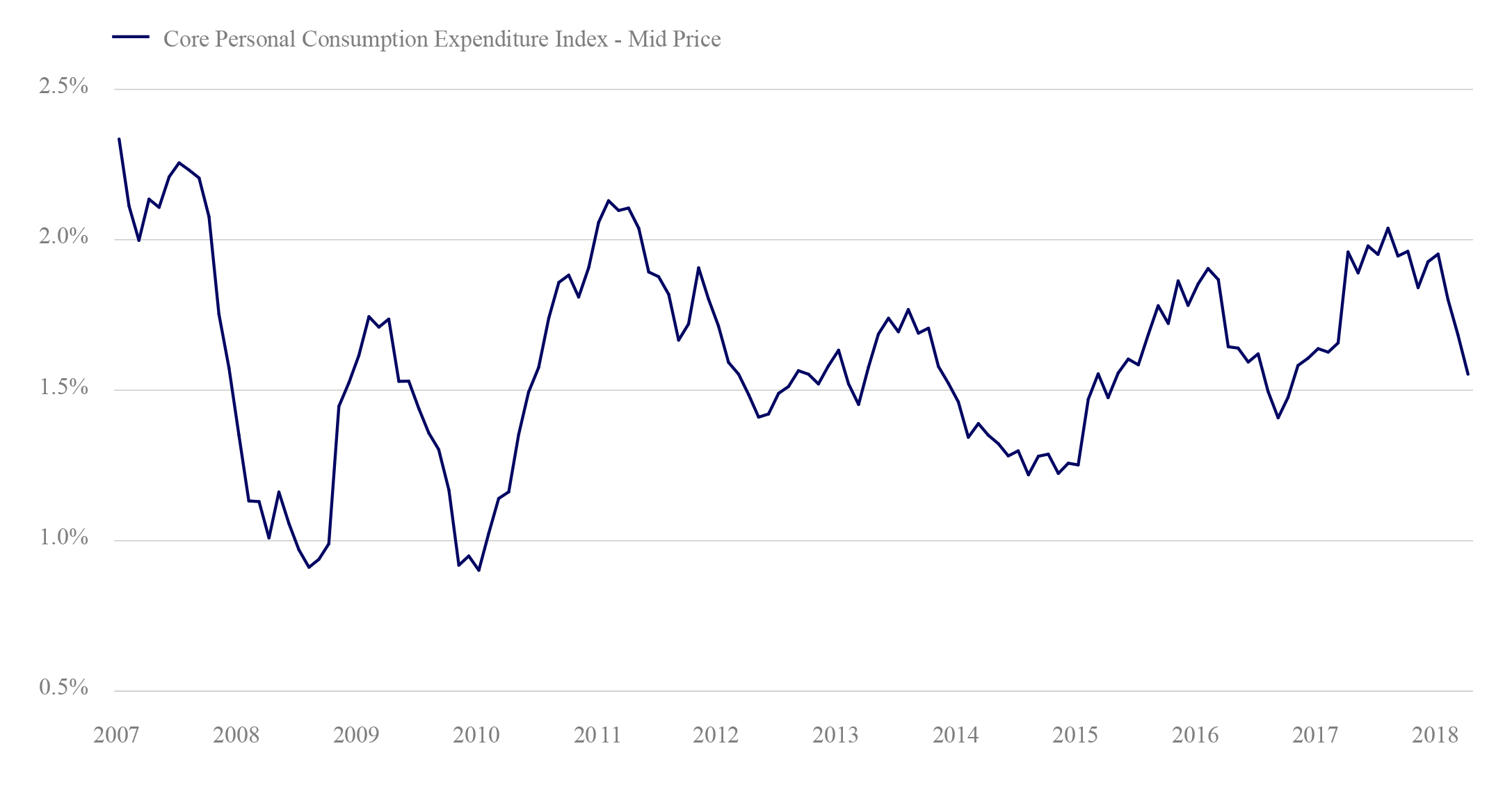 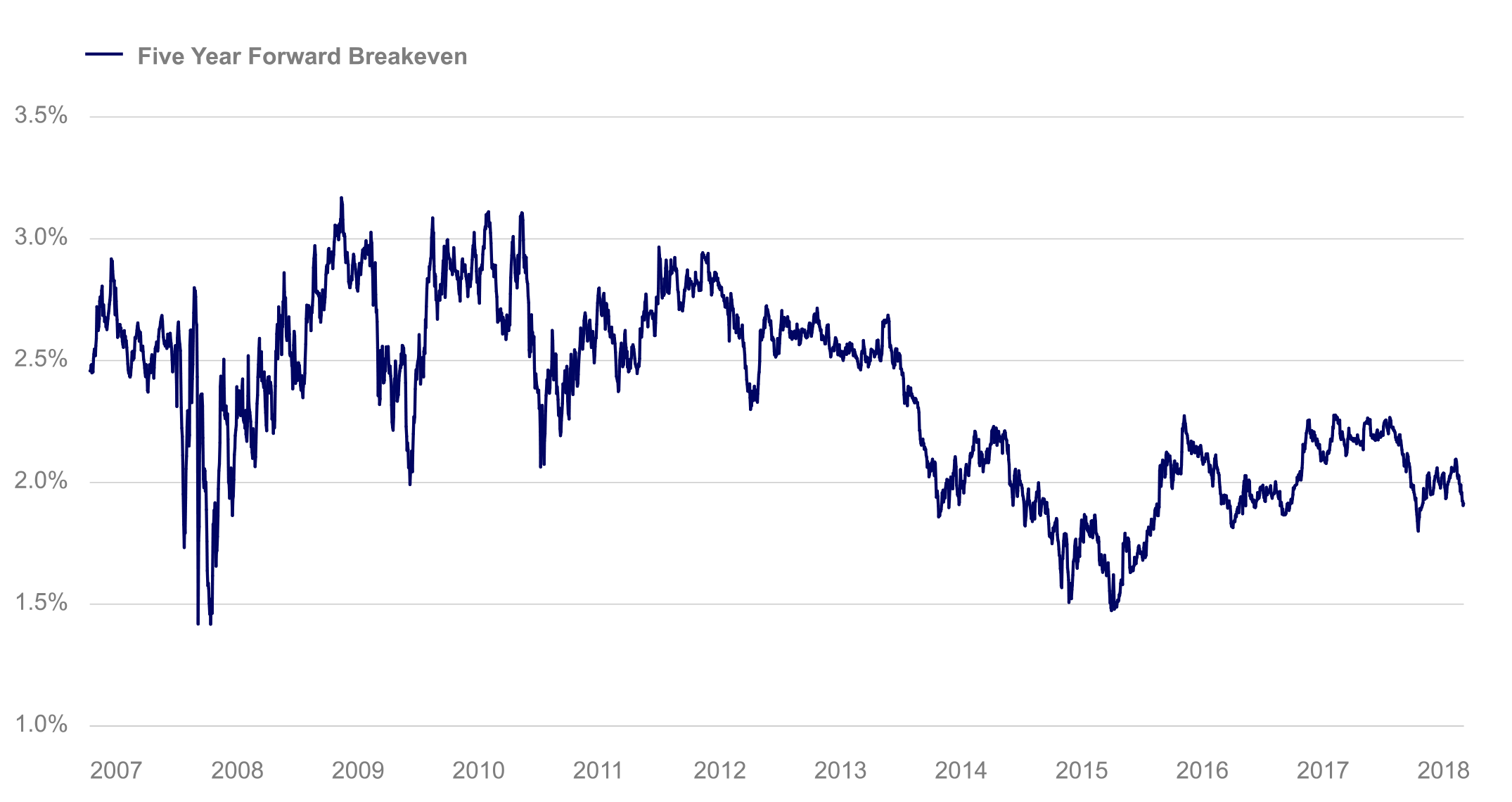 History Not as Good a Guide Nowadays

That doesn’t leave the Fed much room to cut rates to lift inflation to the targeted level or to boost a flagging economy before it falls into recession and employment retreats from maximum levels. As for moderate long-term rates, perhaps, like inflation, they’ve become too moderate. The term premium, or the compensation investors want to take on the interest rate risk of longer-term securities, has been close to zero or negative since 2012, when the Fed formally adopted its 2% inflation target. Indeed, the New York Fed’s 10-year Treasury Term Premium hit a record low -0.7897% in late May, just as the U.S. 10-year Treasury yield dropped a full percentage point to 2.26% from 3.26% in October of last year. 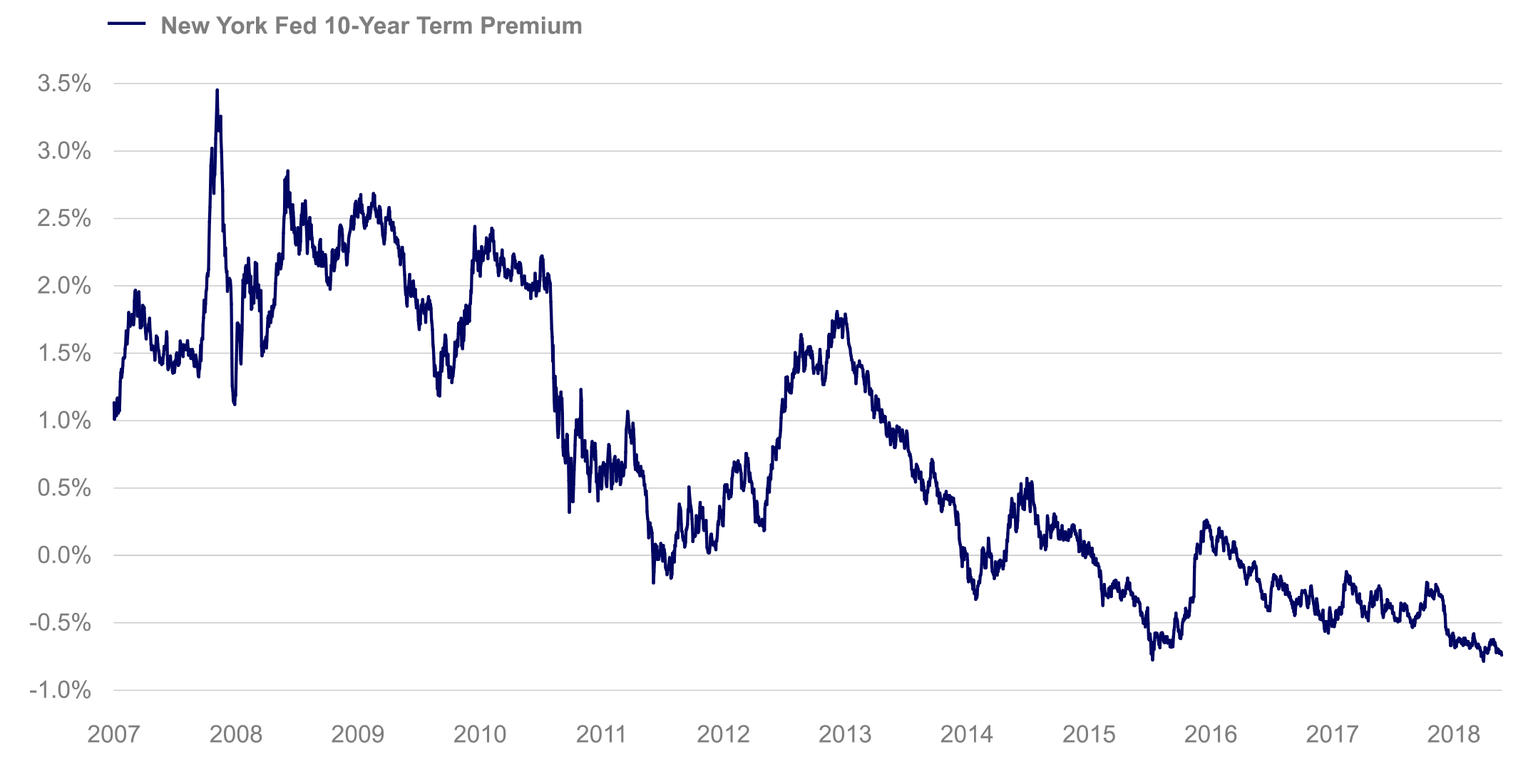 Meanwhile, the market seems unsure about the significance of a modest inversion of the yield curve after three-month rates just exceeded 10-year rates by a dozen basis points. Historically, that usually signals a recession not far down the road. “But history isn’t as good a guide nowadays,” Thornburg portfolio manager Jeff Klingelhofer says. “The Fed has suppressed the term premium with QE and low benchmark rates. But it’s not just the Fed. Foreign demand is also robust, with U.S. rates meaningfully higher than the negative rates in Europe and Japan. Treasuries also draw safe-haven flows out of emerging markets. Capital requirements at banking institutions and the use of Treasuries as collateral in derivatives markets are also driving up demand,” all of which pushes prices higher and yields lower.

While concerns about the tit-for-tat tariffs that the U.S. and China are slapping on each other’s goods imports are compounding worries about global growth, a U.S. recession isn’t fast approaching, despite the yield curve inversion and negative term premium. “Bonds are just doing mathematically what they’re supposed to do,” Klingelhofer points out, adding that the U.S. economy may be slowing, but with growth still projected at 2.6% this year and 1.9% in 2020, it’s not stumbling.

Yet that begs the question about the Fed’s mandate. Unemployment is at a five-decade low; annual wage growth has picked up to average 3.4% over the first four months of 2019, with the lowest income brackets posting the highest gains; consumer debt isn’t at alarming levels and consumer confidence is strong. Toward the end of a rough May, the S&P 500 Index was off 6.6% from its record high a month earlier, leaving it with a total return of nearly 10% so far this year. Ester George, head of the Federal Reserve Bank of Kansas City, warned that leaving rates at still accommodative levels risks asset price bubbles, financial instability and recession. So why is the bond market rallying, the yield curve inverting and Fed funds futures reflecting at least two rate cuts by the end of December?

Fears of a Deflationary Feedback Loop

Rather than the inflationary pressures that 3.6% unemployment and rising wages should create in theory, the bond market appears convinced the Fed is increasingly worried about below-target inflation and especially weak inflation expectations. In simultaneous contrast to George’s remarks, Fed Governor Lael Brainard recently argued the Fed should let inflation “slightly” overshoot its target “for a couple of years” because the U.S. economy’s “new normal” is less influenced by a strong labor market. A handful of other FMOC members have also effectively argued for adjusting the mandate to allow for an average inflation-targeting framework that would permit inflation to run above target until inflation expectations start to converge with it. They’re concerned about disinflation, or slowing inflation, and especially deflation, or falling prices.

Several difficult problems emanate from a disinflationary, not to speak of a Japan-style deflationary mindset, which favors saving over spending as a currency’s purchasing power increases. That, in turn, tends to exacerbate unemployment as recessionary pressures build while consumption declines. “The Fed is very fearful of that feedback loop,” says Klingelhofer. “If you accept the world has deflationary forces such as demographics (aging populations across most regions) and technology advances, there’s a strong case for pursuing inflation.”

But careful what you wish for, Klingelhofer warns. Inflationary forces may only be masked by “Wright’s Law” of falling unit costs amid production improvements and economies of scale. Decent U.S. economic growth coupled with twin fiscal and current account deficits, a fast-growing national debt load in the wake of the 2017 tax reform and the potential change toward a more permissive inflation-targeting framework via a lower-for-even-longer rate regime could undercut the U.S. dollar strength of the last couple years, paving the way for imported inflation. What if economic growth then weakens amid still frothy risk asset prices?

Will the Fed cut rates to boost a weakening economy, or raise them to fight budding inflation and the potential financial market excesses that overly moderate long-term rates create? “If you let inflation run above target, you also let financial bubbles build,” Klingelhofer points out. “How do you square moderate long-term rates, price stability and a sustainably strong economy?”

The FMOC wasn’t expecting to answer that question at its Chicago meeting, and any change in the inflation framework wouldn’t come until next year in any event. But its publicity of the forum at least suggests loose monetary policy until inflation not only hits the 2% target but perhaps exceeds it, too. An elixir of monetary and fiscal stimulus to juice inflation and the economy could make the Fed’s third mandate on moderate long-term rates harder to pull off. Removing the punchbowl in a timely manner is difficult, as past bursts of market bubbles show.

“We continue to believe we aren’t imminently heading toward recession,” Klingelhofer says. “Yet we also believe portfolios should be cautiously positioned.”