Stocks slide on rising rates and yield curve inversion concerns, but a recession doesn’t look likely, judging by other economic data and the high-yield bond market.

If the market is a voting machine in the short run, but a weighing machine in the long run, as value investing father Benjamin Graham said, a lot of equity investors are currently voting with their feet. Short-term investors, he pointed out, stampede from greed to fear and back again quite quickly. Securities prices rise or fall in tandem, reflecting the herd’s shifts in sentiment at any given time.

Long-term investors, by contrast, tend to weigh a security’s price in relation to their assessment of its fundamental, intrinsic value, assessing where its price should more or less end up at some point down the road. Market volatility is helpful for those who aim to buy low and sell high, and compound returns over time.

The reasons bandied about for the current volatility are worth examining, in part given the performance divergence in the stock and high-yield bond markets. Last week, a flurry of financial media headlines suggested the odds of a U.S. economic recession could escalate sharply with the yield curve flattening and potentially inverting as the U.S. Federal Reserve keeps raising its key policy rate. That, in turn, can pressure short-term interest rates higher even faster than longer-term rates rise. As yields rise, bond prices fall, and fixed income becomes relatively more attractive compared to equities.

Given its strong track record as a recession indicator, the yield curve is closely watched by investors across asset classes, including at Thornburg. “Yes, every recession has been preceded by an inverted yield curve, but not every inverted yield curve has meant a recession,” said Jeff Klingelhofer, a fixed income portfolio manager in an internal response to a colleague from the equity team who was wondering what to make of the spate of headlines. “Almost all have, though. And while the curve has flattened, it isn’t inverted.”

The yield curve may indeed be flashing yellow. Measured by the shrinking gap between two-year and 10-year Treasury yields, it certainly bears watching. 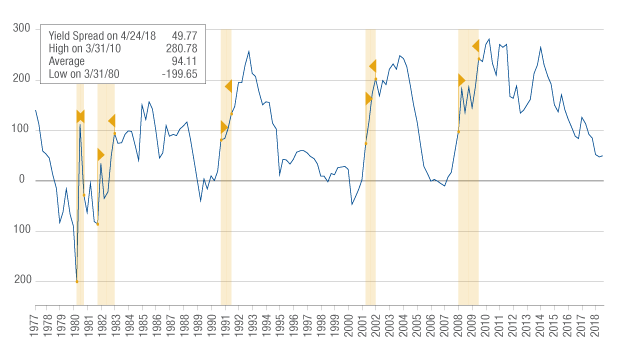 The current slope of the yield depends heavily on current inflation and the prevailing market view of the “neutral” or “equilibrium” Federal funds rate, a level at which it would neither spur nor bridle economic growth. “Right now, the market is generally suggesting that the neutral Federal funds rate is 2.5% to 3%, and thus the Federal Reserve Board (“Fed”) has a few more hikes left in it,” Klingelhofer notes. “With inflation where it is today, that’s probably right.”

The top of the Federal funds rate band currently stands at 1.75%, and Federal fund futures put the odds of it hitting 2.25% or higher by the end of this year at roughly 85%.

Core Personal Consumption Expenditure (PCE), the Fed’s preferred inflation measure, amounted to 1.6% in the 12 months through February 2018, though private sector forecasters see it rising to 1.9% by the end of 2018 and 2.1% in December 2019. Klingelhofer also thinks inflation will continue accelerating. “If it does, then the neutral rate likely moves higher as underlying growth continues to gain momentum. That will pressure long rates higher and less flat.”

Portfolio Manager Christian Hoffmann, who works with Klingelhofer in Thornburg’s fixed income team, pointed out that “there’s also a dearth of other recession signals flashing red.” Bloomberg consensus forecasts put real economic growth at 2.8% this year, up from 2.3% in 2017, but also higher than the 2.5% growth projected in 2019. Private non-residential fixed investment, which is a key indicator of the near- to medium-term sustainability in economic growth, has been accelerating since last September, rising to an annualized 6.8% by the end 2017, up sharply from 4.7% in the third quarter of last year.

The Conference Board Leading Economic Index rose 0.3% in March to 109, suggesting “solid economic growth to continue through 2018.” That’s despite six quarter-point Fed policy rate hikes since 2015. Although financial conditions, as measured by the Chicago Fed National Financial Conditions Index, have tightened since November 2017, the index appears to be leveling off this month, and more importantly, remains well below its 40-year average. 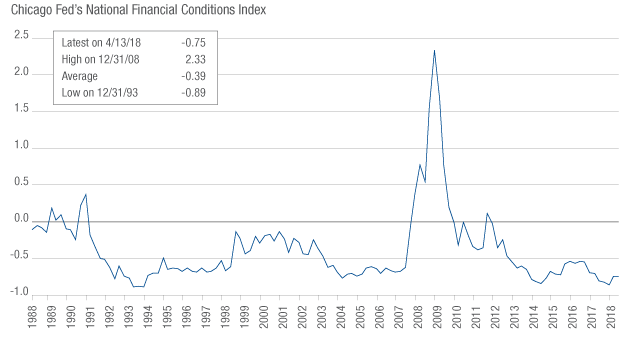 “Given Quantitative Easing (QE), nothing about the curve is natural, nor predicated on history,” says Hoffmann, referring to the Fed’s “quantitative easing.” The Fed quintupled its balance sheet with this asset purchase program in an unprecedented bid to revive the economy after the 2008 financial crisis. It ended its purchases of Treasuries and mortgage-backed securities in late 2014, and late last year began allowing a quite limited amount of maturing issues to roll off its balance sheet monthly. “If the Fed unloaded its balance sheet, would the curve be steeper? I think it would,” Hoffmann says.

Throw in other factors, including technicals such as Treasury supply and demand flows, and Hoffmann says he doesn’t think a relatively flat yield curve “is a primary driver for Fed policy at this point.”

To be sure, while the underlying economy is strong, Klingelhofer doesn’t think it’s strong enough to handle long-term rates much north of 3%. Higher lending rates based off the 10-year Treasury will at some point undercut credit demand. “As inflation ticks up, the Fed will respond, and this economic cycle, as with others before it, will come to an end.”

Perhaps core PCE will reach the Fed’s 2% target at some point next year. In the meantime, it sure doesn’t look like recession is around the corner. Blended first-quarter earnings growth for the S&P 500 Index was most recently running at 18.3%, with revenue growth climbing 7.6%, according to Factset. Higher wage and other costs may shave corporate operating margins, but if margins are still ample and earnings strong, they should ultimately drive longer-run equity returns.

Those hitting the sell button on their industrial and tech stocks might first take a look at the high-yield bond market. While the S&P 500 Index’s total return by the end of trading on April 24, 2018 was a negative 0.9% so far in 2018, the Bloomberg Barclays U.S. Corporate High Yield Bond Index was flat, and its Caa-rated junk segment was up 1.56%. It appears investors in high-yielding, non-investment grade securities don’t expect a recession anytime soon.

The cost of capital and return on investment will no doubt be affected as rates rise. Still a flattening or inverted yield curve isn’t always a precursor of recession. “But it is a good indicator of sentiment, which perhaps is the true cause of recessions anyway, so highly coincident,” Klingelhofer points out.