Ride the Dollar Tide at Your Risk

Earnings revisions aren’t yet supporting emerging market index valuation multiples, which have largely been driven by dollar-fueled jumps in materials and energy prices. Currency volatility, though, isn’t a solid base on which long-term developing country stock investors can bank. Ultimately, corporate earnings and valuations matter.

After three straight years of declines, developing country stocks regained some ground in 2016. Yet the MSCI Emerging Market Index’s 11.2% total return in 2016 came with marked volatility along the way. The year started with oil prices testing multi-year lows as concerns about China’s economic stability amplified already heightened global growth worries, following the U.S. Federal Reserve’s December 2015 benchmark interest-rate hike. Anxiety peaked in late January after one of the worst-ever starts to the year for most equity markets. The expectation then was that unbridled dollar strength would weaken foreign currencies and commodity prices and stifle global growth as dollar liquidity was removed from global markets. Fearing that overseas markets might undercut the fragile U.S. recovery, the Fed decided to remain on hold for most of 2016. The unexpected shift toward a more dovish stance was enough to drive a recovery rally in all markets, including commodities. From the bottom in late January to its high mark for the year on September 8th, the MSCI Emerging Market Index gained nearly 35% in price and delivered 37.5% in total return.

As we’ve noted before, and as you would expect in the early stages of a rally, earnings have been slower to recover than valuation multiples. Over the course of 2016, forward earnings for the emerging markets index were revised up only 2%. From the lowest point in January, total revisions were a meager 6%. Well over half of this was driven by materials and energy, which could largely be explained by the change in the dollar’s trajectory. That positively impacted commodity prices but not necessarily underlying supply and demand dynamics. For example, according to the U.S. Department of Energy, global crude- and liquid-fuel inventories continued to climb all year, closing 2016 nearly 5% higher than at the end of 2015. Looking at iron ore, China, the largest buyer of seaborne iron ore on a global basis and more than 50% of incremental demand, saw its total port inventory grow by more than 20% over the course of the year as domestic demand declined. Nevertheless, iron ore prices increased more than 80% despite the fact that global supply is again expected to outpace demand, inventories continue to build, and China demand is set to fall for a second straight year as Beijing continues to idle high-cost steel production. See Chart 1 and 2 below. 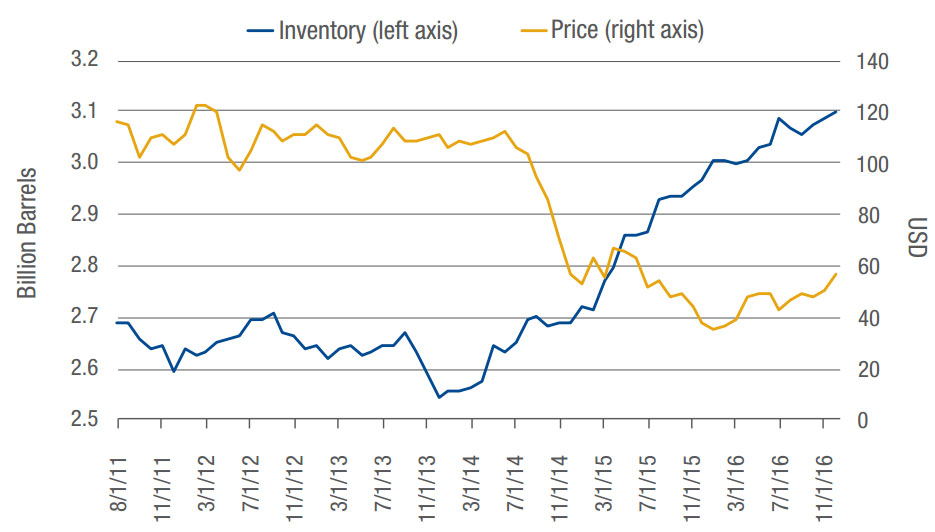 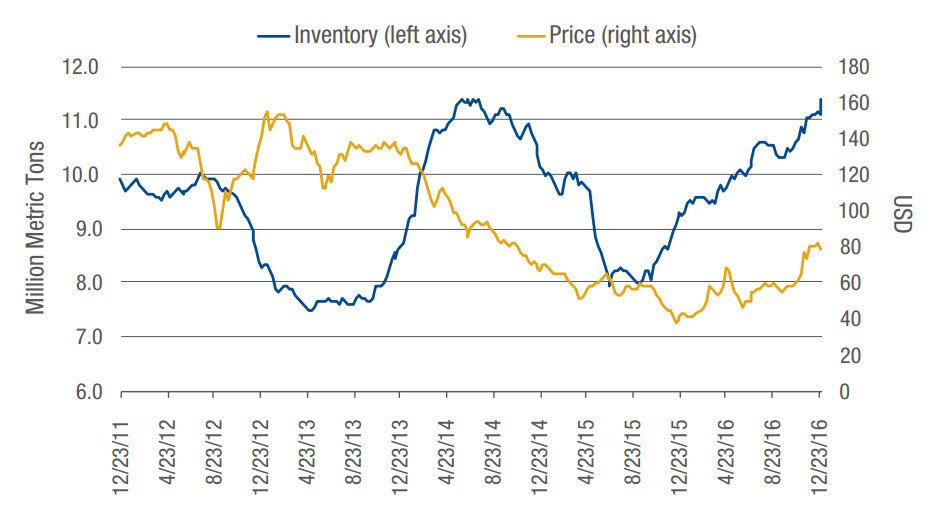 Investors would be wise to pick their shots carefully. Broad, dollar-driven market swings higher may encourage some to tactically ride investment flows. But foreign exchange dynamics can shift hard and fast, as we saw last year. We believe it makes more sense to base investment decisions on individual stock fundamentals, assessing whether earnings growth justifies valuations. It’s far better to own stocks in which multiples, given earnings prospects, stand a better chance to re-rate, rather than de-rate, whether the Fed actually shifts its monetary stance or not.