Despite sprinting higher so far this year, developing country equities appear well positioned to sustain their momentum, and with less volatility.

Amid the broad rebound in global risk assets, developing country stocks posted their best first-quarter returns since 2012, with the MSCI Emerging Markets Index advancing 9.9%. Like advanced economy equities and the expanding credit universe generally, the U.S. Federal Reserve’s u-turn from steady monetary tightening in 2018 to effectively standing pat on its key target rate this year, along with ebbing U.S.-China trade war tensions, created powerful tailwinds for Emerging Market (EM) stocks. How much near-term upside is left?

“With declining growth in advanced economies, the projected pickup in global growth in 2020 is entirely predicated on this projected improvement for the emerging market and developing economy group,” the IMF noted in its April 2019 World Economic Outlook. “The combination of higher growth than in advanced economies and the group’s rising weight in global GDP translates into a significant increase in emerging market and developing economies’ share of global growth, from 76% in 2019 to about 85% in 2024,” the IMF added, noting its EM forecast incorporates “continued strong investment growth” accounts for more than a third of the forecast GDP expansion.

As the Fed’s finger is now off the rate trigger, last year’s dollar headwind has dissipated. This combined with lower core interest rates worldwide should bolster the favorable economic backdrop in emerging markets. At the same time, relative valuations in EM remain compelling, notwithstanding the multiple expansion early this year. The EM benchmark’s trailing price-to-earnings ratio, at 13.2x, is still around 1.5 multiple points below its levels both a year ago and two years ago. It’s also two to six multiple points cheaper than the MSCI USA Index and MSCI EAFE index. 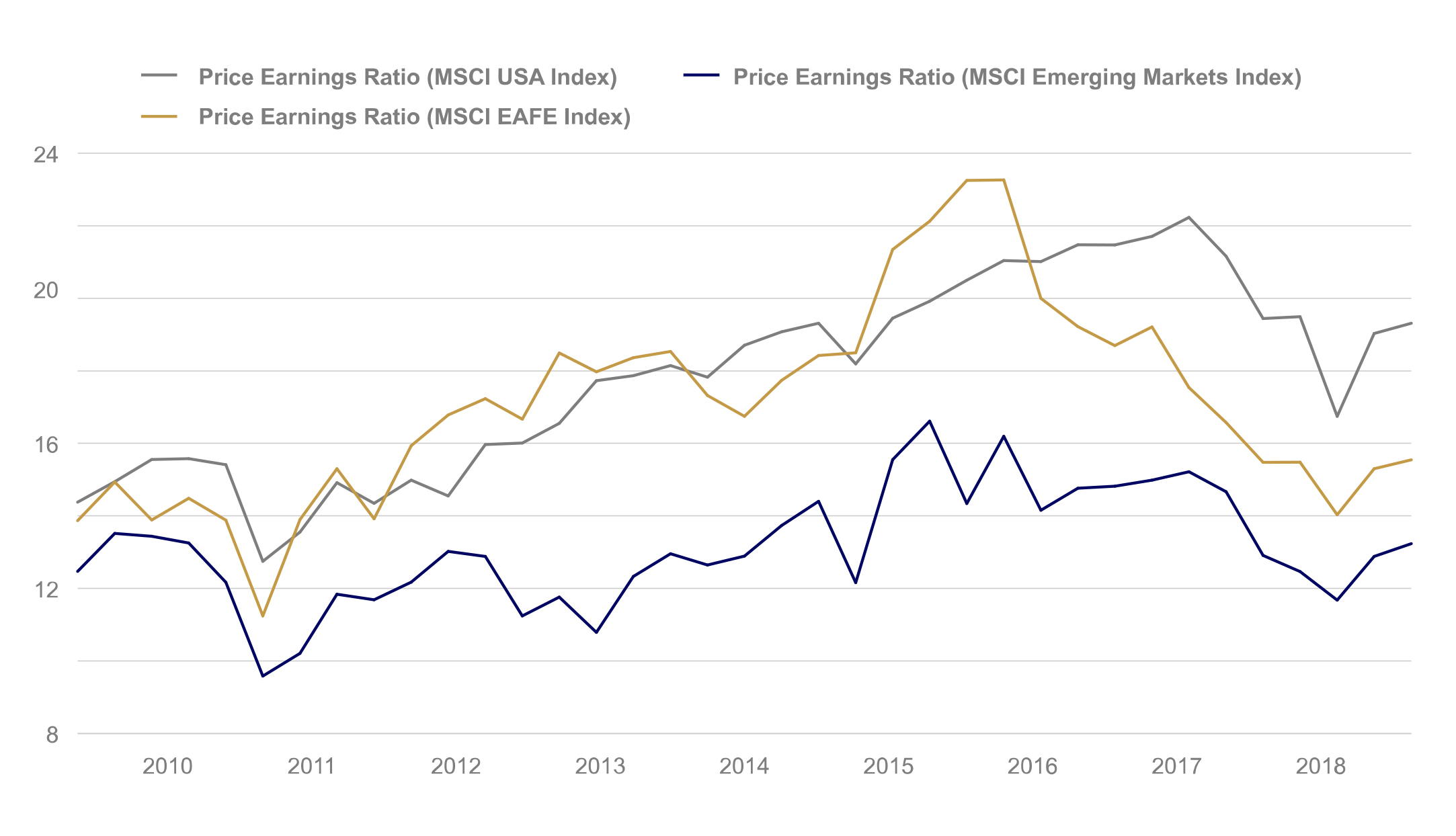 On a price-to-book basis, emerging market stocks are a bit cheaper than they were in early 2018, currently much cheaper than those in the MSCI USA and no more expensive than the MSCI EAFE Index. 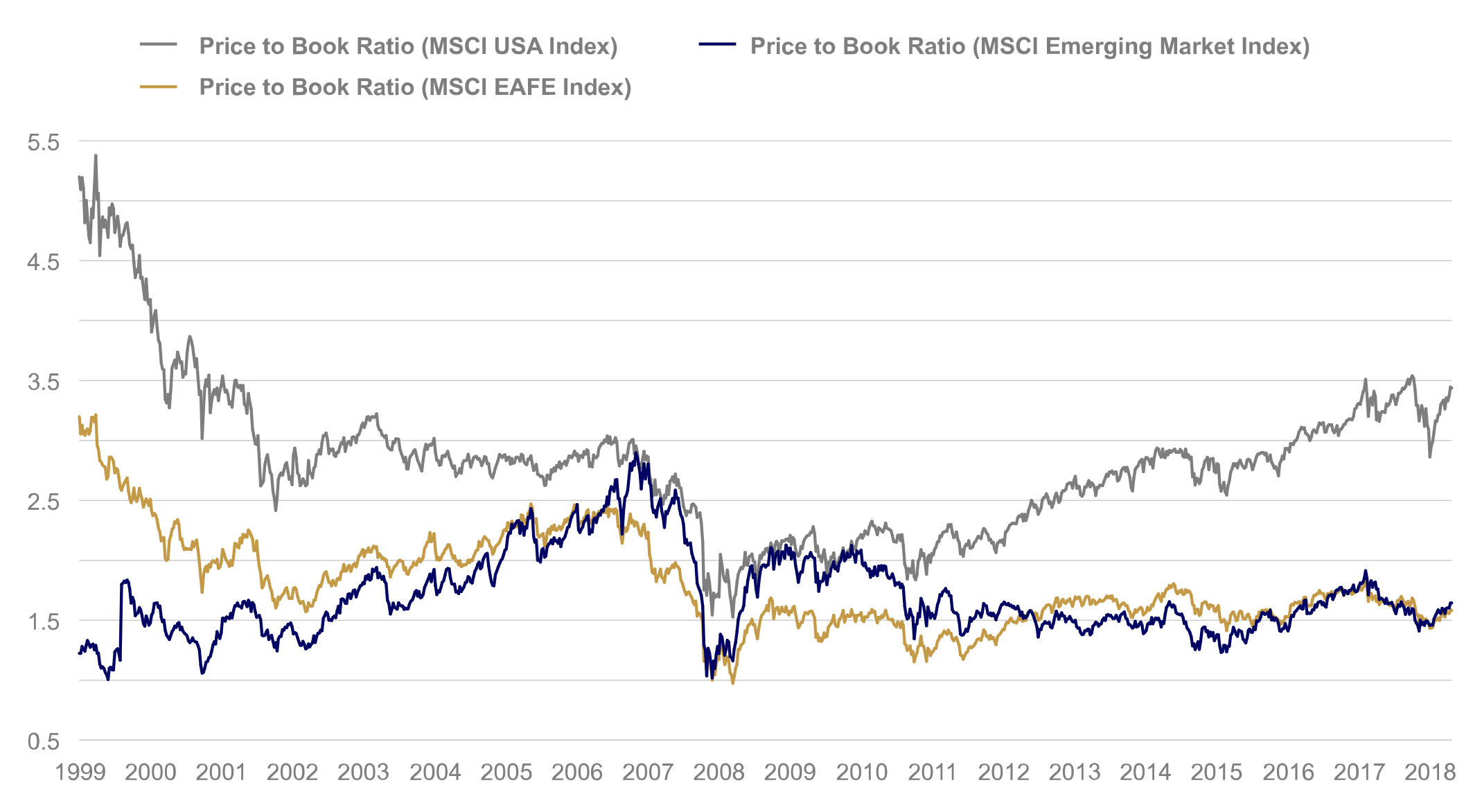 Meanwhile, the EM index level return on equity (ROE) amounted to 12.8% in early April, sandwiched between the MSCI USA Index’s 15.9% and the MSCI EAFE’s 10.8%. A company’s price-to-earnings multiple and price-to-book ratio are typically related to its return on equity, which reflects how efficiently profits are generated compared to capital invested (capital allocation). Given the higher ROE in EM relative to developed international markets, there is certainly a case for EM to trade at a higher valuation. 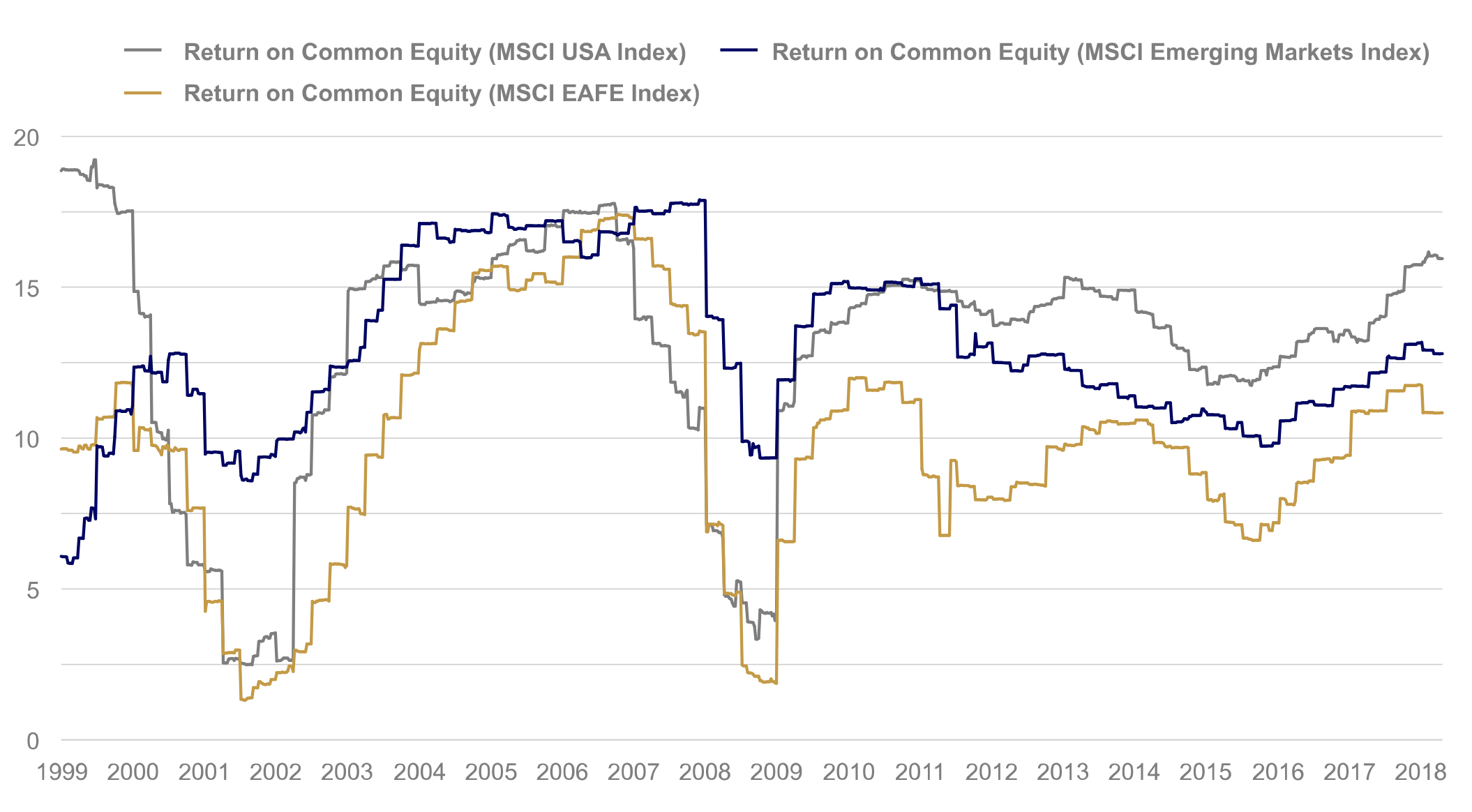 In addition to compelling valuations, prospects for emerging market earnings are also looking strong. In U.S. dollar terms, aggregate EM revenue has been rather flat since 2014, largely reflecting the decline in commodities prices and strength in the greenback as the Fed raised rates, Thornburg Associate Portfolio Manager Josh Rubin notes. “While the MSCI USA Index revenue growth has been greater, it’s running near peak levels,” he points out. “By contrast, many EM economies have reformed and rebalanced since commodity prices swooned. Currency stability related to the Fed’s pause can now allow underlying EM revenue growth to shine through.” 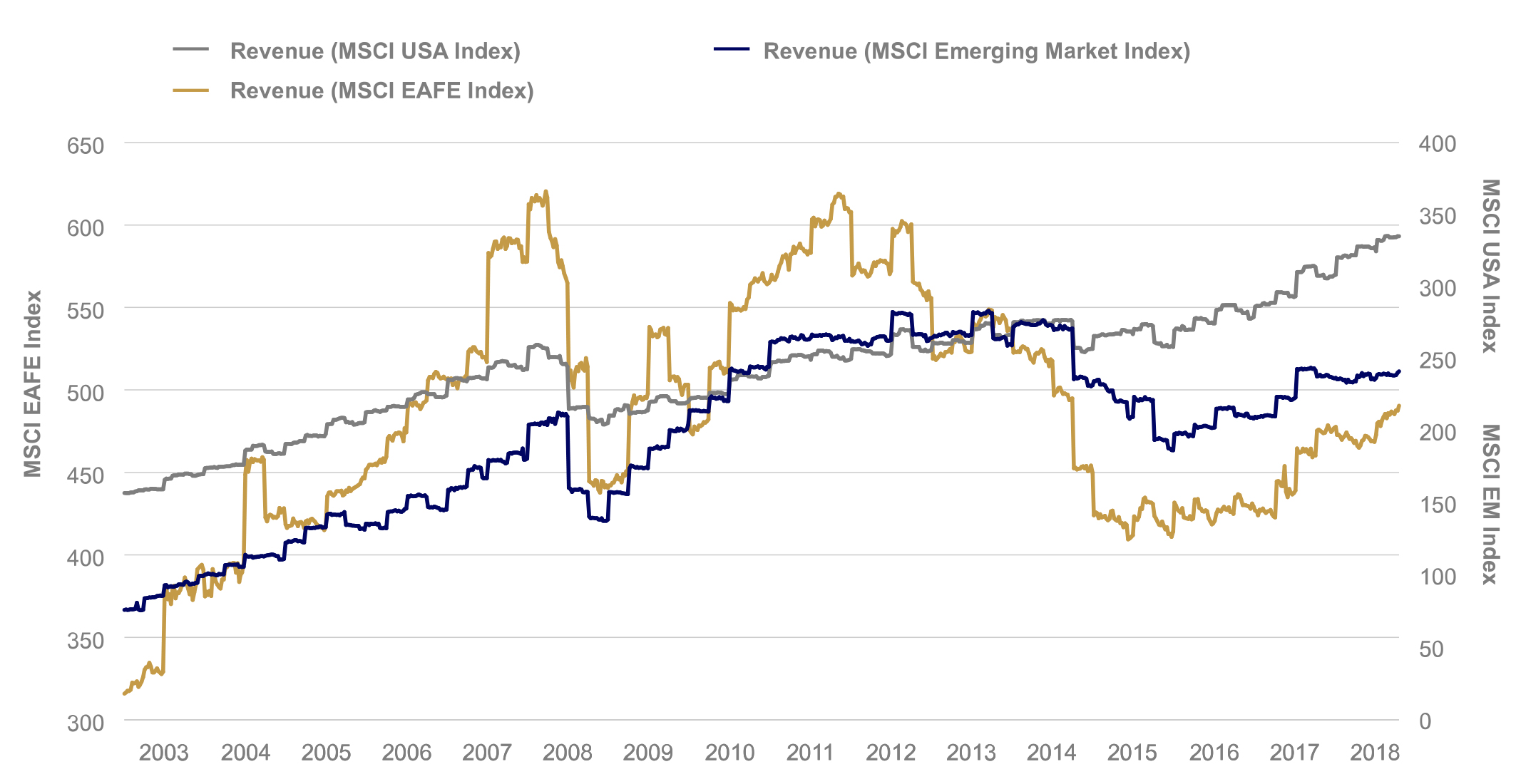 Interestingly, forward blended earnings per share forecasts reveal an interesting drag at the EM index level that has less to do with aggregate developing country earnings expectations than with the cyclicality in the global chipmaking industry and generally soft demand in much of the developed world. Rubin points out that Korea and Taiwan comprise about a quarter of the EM index, yet the two countries’ indices are dominated by chipmakers and other firms in the global technology supply chain, not to mention auto companies. So, while earnings estimates have been stable or growing across the “BRICs” (Brazil, Russia, India, China) and other domestically oriented emerging markets, aggregate EM index earnings have been pulled lower largely by softer demand in developed markets. Active investors can tailor their exposures accordingly. 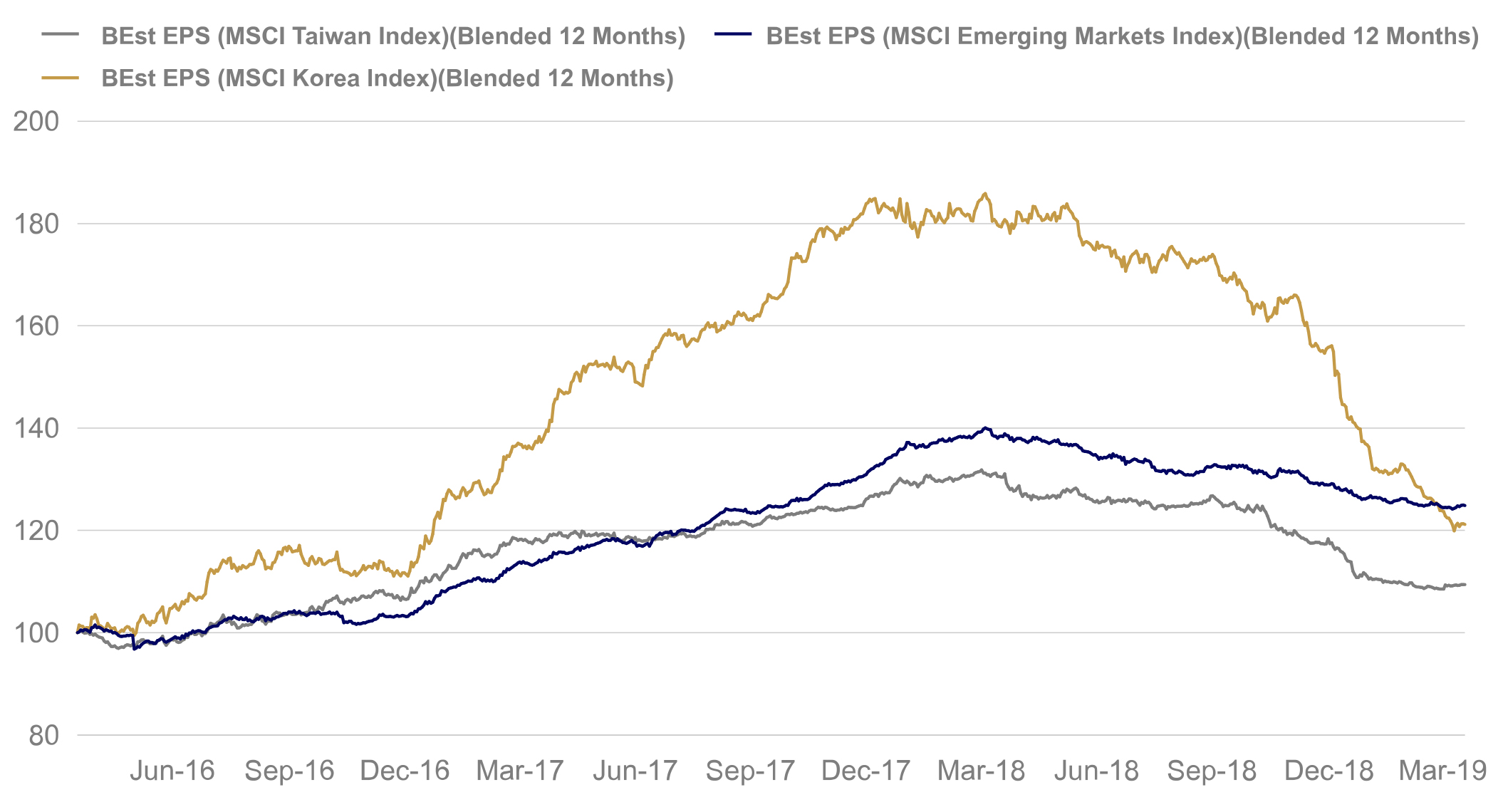 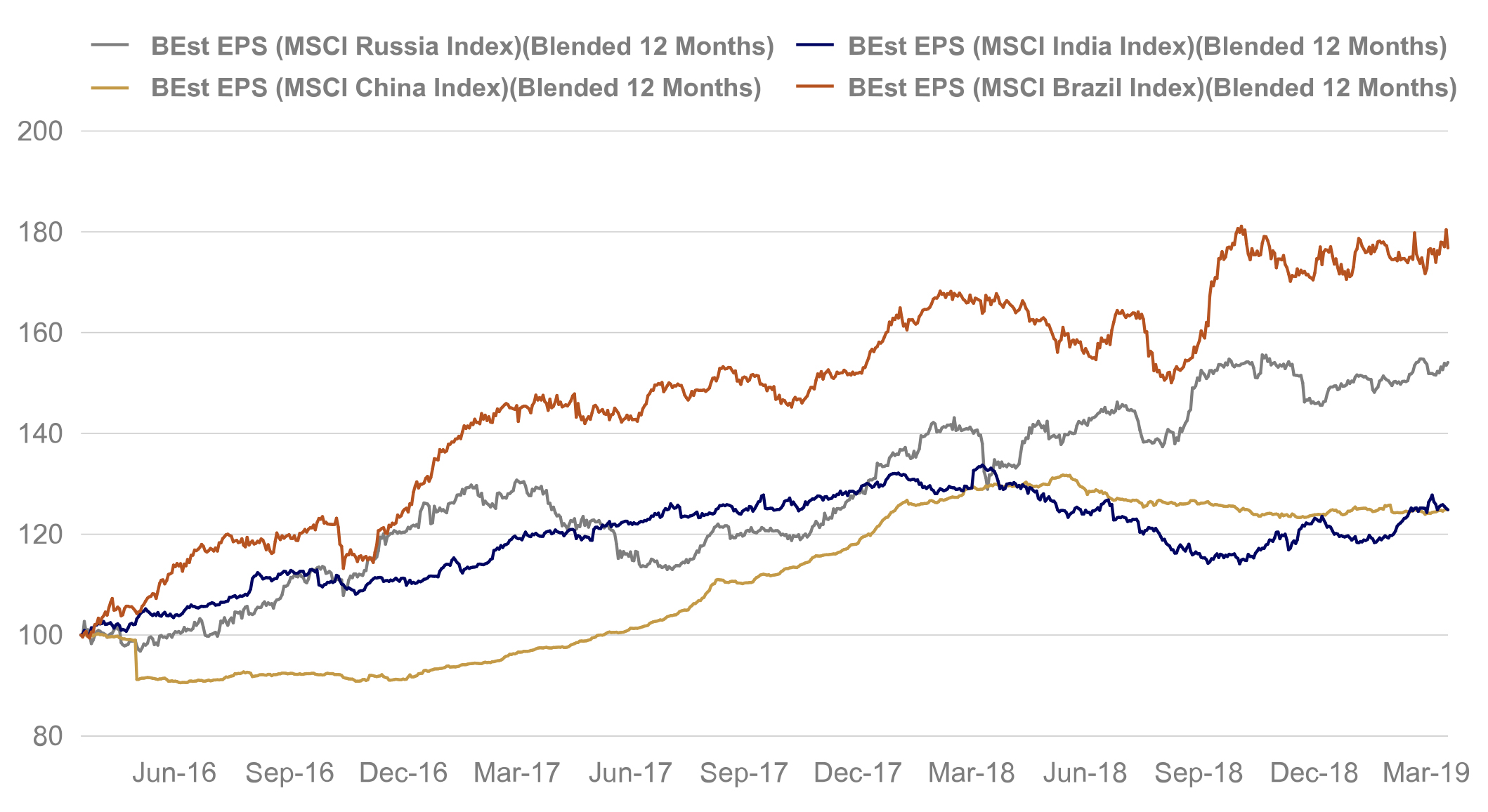 The rise of those premier emerging market chipmakers also coincides with the proliferation of other world-class developing country tech stocks, particularly in China and India. Their growth has been so significant that they’ve transformed the complexion of the benchmark index (MSCI EM Index): a decade ago, energy and materials stocks comprised about 30% of the index weighting. Today, they represent half that. On the flip side, tech represented 13.5% of the index a decade ago; now, information technology and tech stocks in the communications services and consumer discretionary sectors account for a bit more than double their weight a decade ago.

What’s the result? The index today exhibits about half the volatility that it did both a decade and two decades ago. Thornburg Portfolio Manager Charlie Wilson suggests that the index composition changes have “reduced the cyclicality and therefore the volatility of the index.” 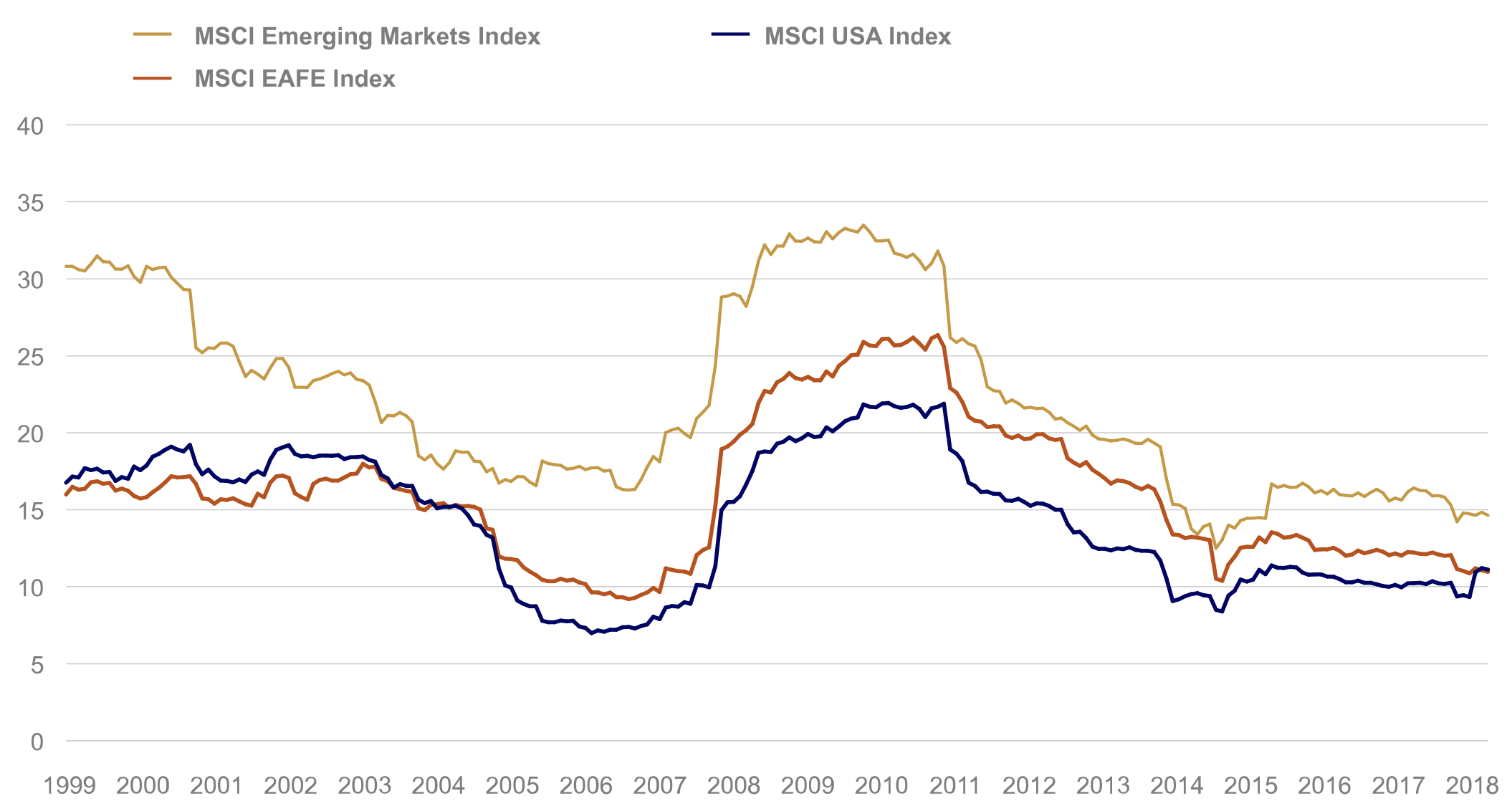 Profitability and Balance Sheet Strength in a Debt-Laden World

Corporate balance sheet strength and income efficiency are becoming increasingly important, given rising private sector and government debt. According to the IMF, global debt reached a record $184 trillion in 2017, or 225% of global GDP. The most indebted—U.S., China and Japan—make up more than half of that total. And China’s accounts for over half of the total debt burden in emerging markets. Yet even including China, total emerging market debt averaged 168% of GDP, far less than the advanced economies’ 266% average.

Perhaps more importantly, total credit to the non-financial sector in emerging markets amounted to 179%, again significantly less than the 264% extended within advanced economies, according to the latest data from the Bank for International Settlements.

All in, emerging markets equities still trade at attractive relative valuations, with solid economic and projected earnings growth, high profitability, manageable debt levels, and nowadays exhibit half their historical volatility. The risk of near-term Fed rate hikes and dollar-based headwinds appears off the table. A U.S.-China trade resolution would only improve market sentiment, though its notable that emerging market stocks have moved higher, even as contentious negotiations continue.

Despite double-digit gains from the beginning of 2019 through mid-April, the rally in emerging market equities may well still have legs.