You can add current income, capital appreciation and tax advantages to your portfolio with this one type of investment.

Tradeoffs are a fact of life. Every time we make a decision, we weigh the positives and negatives of one choice against another. And even though we go through that sometimes painstaking exercise, there are times when the choice we make doesn’t fully eliminate the desire we had for the option we didn’t choose.

Consider the tradeoffs your hypothetical friend made when she decided where to vacation this summer. She always loves going to the mountains, but this year she was equally interested in spending a week in New York City. The mountains offer beauty, peacefulness, nature and solitude. The city offers activity, entertainment, museums and great restaurants. This year the vacation in the mountains won, but that doesn’t mean she isn’t still dreaming about a meal at her favorite restaurant or that she’s stopped wishing she’d gone to see “Hamilton.”

As an investor, you may feel like you’ve had to make tradeoffs along the way. You probably worked with your financial adviser to choose investments that offered you the potential for the income, appreciation and tax benefits you needed to help you achieve your goals. Of course, no one investment does it all. That’s one of the main reasons you’re diversified.

But one investment, over the long-term and through all types of markets, has delivered a number of the benefits you’ve been seeking. What is it? Dividend-paying stocks.

As she prepared for her journey, your friend focused on packing light. She knows that the less weight she has to carry, the easier it will be for her to focus her energy on the task at hand. So instead of taking along a number of heavy tools, she opted for one that has many uses: a Swiss Army knife.

Like a Swiss Army knife, dividend-paying stocks provide investors with a number of benefits—three, in particular, that may eliminate the need for tradeoffs. They include:

1. Current Income that May Grow Over Time

Historically, investors have purchased equities, or stocks, which represent proportional ownership in a company, hoping their shares will appreciate in price as the company becomes more profitable. But stocks may deliver other benefits as well. As companies prosper and mature, they often decide to share some of their profits with shareholders in the form of cash dividends, though this is not guaranteed. Like bond interest payments, cash dividends represent a current form of income. Unlike bond interest payments, which remain fixed for the life of the bond, cash dividends paid to equity shareholders may grow over time. 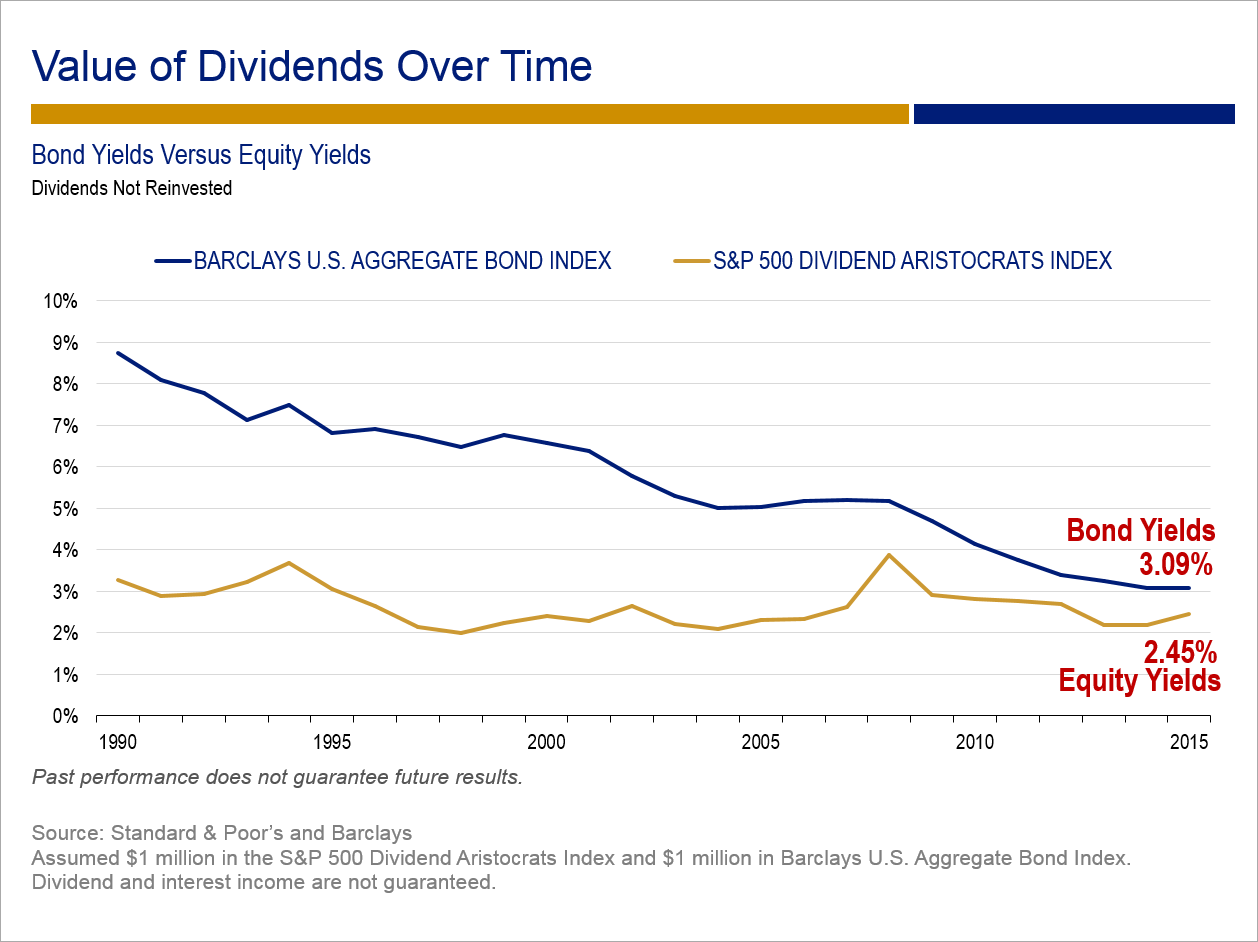 For many years, investors have lived in a declining interest-rate environment. Figure 1 demonstrates that between 1990 and 2015 bond yields, as illustrated by the yield on the Barclays U.S. Aggregate Bond index (composed of approximately 8,000 publicly traded bonds including U.S. government, mortgage-backed, corporate and Yankee bonds weighted by the market value of the bonds in the index), dropped from a high of nearly 9% to 3.09%. Over the same period, equity yields, as illustrated by the dividend paid on the Dividend Aristocrats Index declined from just over 3% to 2.45%. The Dividend Aristocrats Index includes large cap, blue chip U.S. companies within the S&P 500 Index that have consistently increased their dividends for the past twenty-five years.

If you’re an investor who invests for income, this declining interest-rate environment is challenging and disappointing. But, before you toss in the towel, take a look at Figure 2. 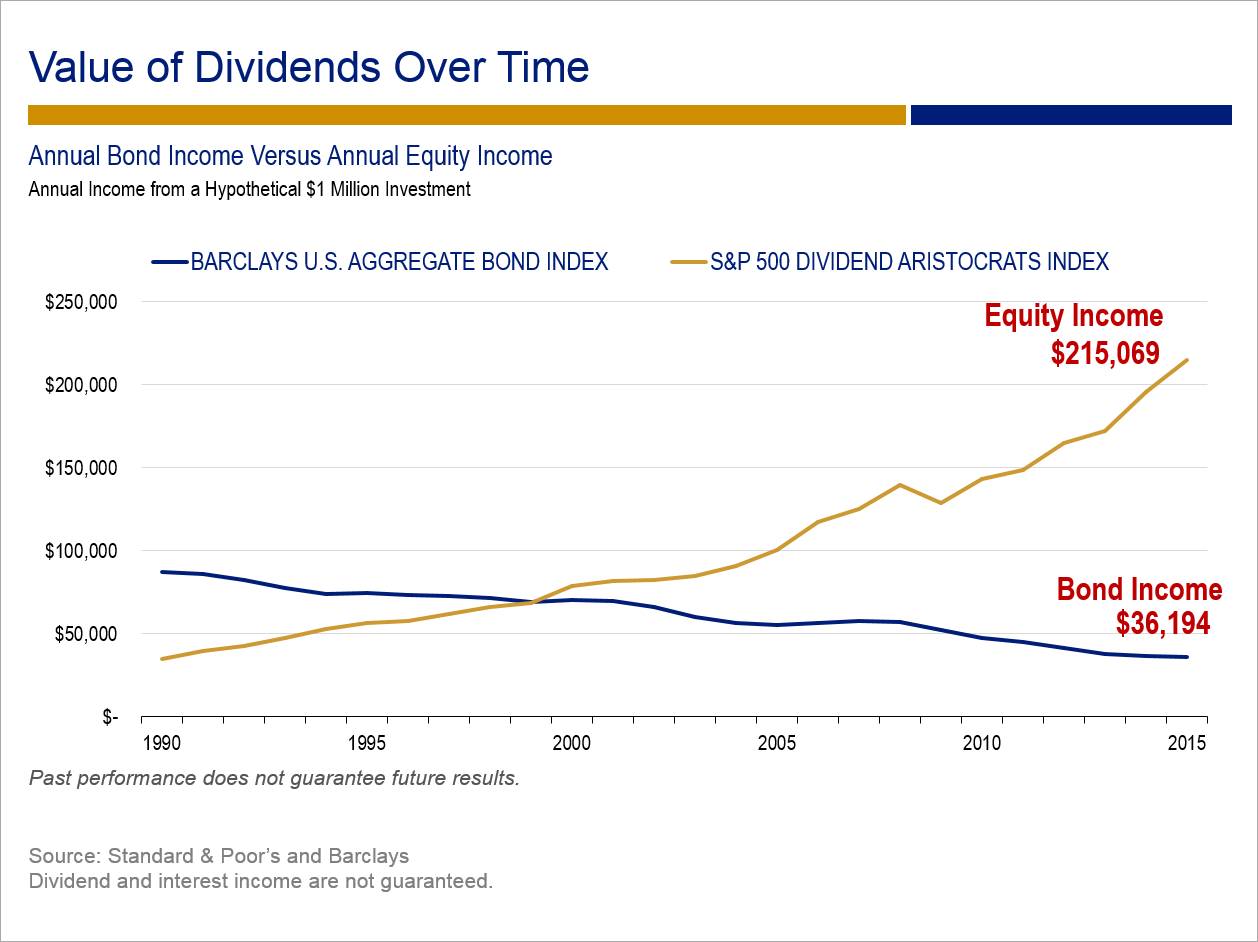 Instead of focusing on what’s happened with yields as a percentage, Figure 2 shows the amount of income a hypothetical investment (investors may not make direct investments into any index) of $1 million in the Barclays U.S. Aggregate bond index or the Dividend Aristocrats Index would have generated over the same time period as Figure 1.

In addition to possibly generating a current income stream that has the potential to grow over time, dividend-paying equities also provide investors with the opportunity to grow the value of their investment over time. 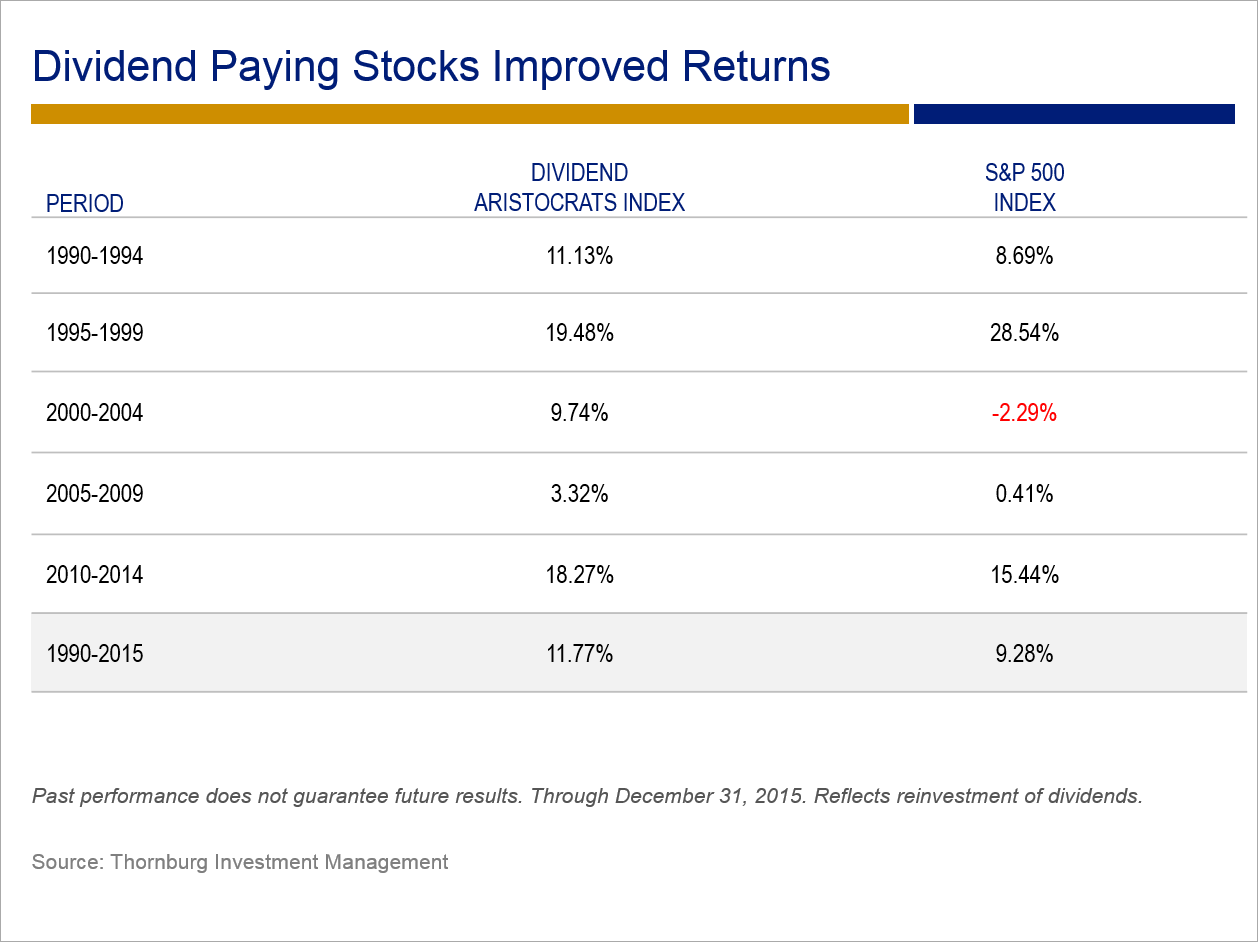 Figure 3 compares the total return of the Dividend Aristocrats and the S&P 500 Index during different time periods. When you compare the returns in each of the periods, the stocks in the Dividend Aristocrats outperformed the stocks in the S&P 500 during every period except the five years between 1995 and 1999 (which was a time of rampant speculation that drove the prices of many stocks to unsustainable levels).

Finally, according to the United States Internal Revenue Code, cash dividends investors receive from equities may qualify to receive tax-advantaged treatment. As a result, ordinary cash dividends paid to shareholders that meet specific criteria may be taxed at the lower long-term capital gains tax rate rather than at the higher rate that’s applied to an individual’s ordinary income. It should be noted that everyone’s tax situation is different and this should not be considered tax advice. You should consult your tax advisor for personal tax concerns.

None of this means you should have a portfolio that is comprised entirely of dividend-paying stocks, but it does mean that dividend-paying stocks are a very versatile investment that you may have previously overlooked. Tradeoffs may be a fact of life, but when it comes to investing, you may not have to make as many as you originally thought.

For more Building Your Business read the previous article