What’s Driving the Market Rotation from Growth to Value?

A rising Treasury yield amid better economic data, easing macro risk and a few more monetary injections may be spurring the rotation. Corroborating, so far, a “mid-cycle adjustment”?

Value stocks have staged an eye-popping rebound in recent trading sessions, turning the tables on low-volatility and momentum stocks, which on Monday had their “worst day for such a strategy since 2009,” according to Bloomberg, even as the broad S&P 500 Index was little changed.

Is a rotation of the sort seen a year ago, when value held up better than growth in the last quarter of 2018, in the cards? It certainly seems that way, though whether it lasts weeks, months or longer is the real question. The cause of the rotation is also worth pondering, given that the 10-year Treasury yield popped around 30 basis points over the last week as well.

Thornburg Portfolio Manager Robert MacDonald thinks a combination of things is at play. “Valuations in growth, momentum and low-volatility ‘bond-proxy’ stocks reached extremely high levels, while those of traditional value stocks, such as energy, materials, industrials and other cyclical sectors hit extreme lows,” he points out. “Value stocks were priced as if we were in recession.” 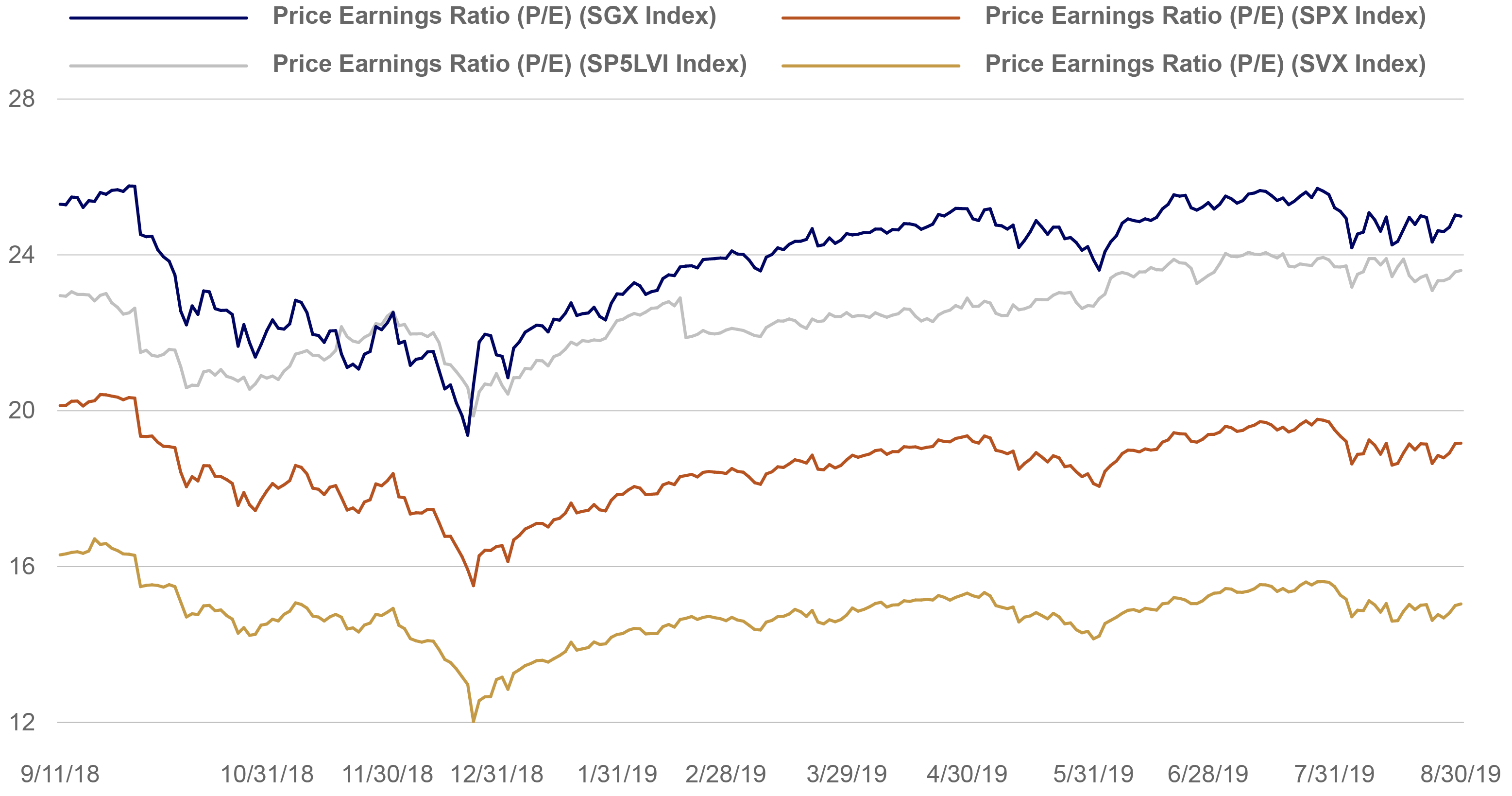 At the end of last December, the price/earnings multiples of the S&P 500 Growth and Value indices were separated by about seven points, but by the end of last month that delta gapped to nearly 10 points, and it was about as wide with the low-vol stocks, MacDonald points out. Yet a batch of recent data suggest the sky isn’t falling on the economy.

At 109.2 in July, the Industrial Production Index is still near the end-2018 peak of 110.6. Factory orders have more than recovered from their 2019 trough in May, hitting a 2019 high of 1.4%, also in July. The Conference Board of Leading Indicators is back at its highest level in a year. The Citi Economic Surprise Index for the U.S. turned positive this month, and globally started heading higher in June, gaining considerable upward momentum since early August.

Nonetheless, the market has priced in another benchmark rate cut or two from the U.S. Federal Reserve. It’s also factoring in recent easing measures by China’s central bank, including another meaningful reduction in the ratio of banks’ required reserves. And the European Central Bank has also just provided a new round of accommodation.

Geopolitical risks seem to be weighing less heavily lately as well. Prospects appear to be growing for a U.S.-China trade détente in which no more bilateral tit-for-tat sanctions are imposed, if not rolled back. Tensions may also be easing in Hong Kong, where Chief Executive Carrie Lam has rescinded a controversial bill that would allow extradition to the mainland. Brexit, too, may not be looming as largely as before, given the U.K. Parliament’s maneuvering to extend the October 31 divorce deadline short of an agreement struck with Brussels.

But if “international developments,” as the Fed referred to them in its July 31 monetary policy statement, are likely to factor less heavily into its calculations, and U.S. economic data continue to surprise on the upside, the “mid-cycle adjustment” in the longer policy normalization that Fed Chairman Jerome Powell highlighted at the time looks shorter than the market had hoped.

Because a lower discount rate in discounted cash flow (DCF) analyses tends to make growth company P/E multiples worth more, a higher-rate environment has the inverse effect. So just as when rates were rising a year ago and the present value of projected future cash flows were looking more strained with the growth stocks, the same may be happening now if the latest rise in Treasury yields continues.

An increasing cost of capital could create challenges for some growth companies with tech-based, innovative new business models, but negative cash flows. When rates are low or falling, these firms may prove disruptive to more traditional, value-classified companies that do produce free cash flow. But a higher-rate environment may not be as amenable to those that don’t generate free cash flow or have truly promising–and proven–business models, such as Amazon, MacDonald notes.

Perhaps that’s why we may now be seeing a reappraisal in forward earnings expectations in the S&P 500 Value (SVX) and Growth (SGX) Indices.

Index level movements are always interesting, but for active managers who are sensitive to valuation extremes, market rotations are opportunities. Discounts to assessed intrinsic value in “value” or other shunned stocks with good or at least decent business fundamentals may be recognized and rewarded by the broader market. And for long/short portfolios, the short positions on companies whose stocks have overshot their fundamentals on the upside, opportunities also exist as they fall back to earth.