Trump Trade? The More Likely Reflation Trade is in Europe

Political risk may have ratcheted lower after the first round of the French presidential election. But the latest jump in asset prices across Europe appears to have tailwinds well beyond politics.

European asset prices have surged since independent Emmanuel Macron emerged as the decisive winner in the first round of the French presidential election, with far-right nationalist Marine Le Pen of the National Front making it into the second round of voting on May 7. Heading into the runoff, Macron holds a lead in polls of more than 20 points over Le Pen, suggesting markets may have another leg up after the second round.

Beyond the electoral outcome, however, longer-term, bottom-up investors have reason for optimism about the prospects for European securities, particularly equities. But the political environment created some nice entry points for valuation-sensitive managers. Risk assets were heavily discounted going into the April 23 voting on fears the European Union- and euro-skeptical Le Pen might face off with hard-left candidate Jean-Luc Melenchon, who along with conservative François Fillon of the Republicans Party, was running a few points behind Le Pen in pre-election polling. Yet with centrist Macron, a 39-year-old former investment banker and ex-economy minister under incumbent President François Hollande of the Socialist Party, the discount on risk assets has diminished heading into the runoff.

The pro-E.U. Macron had publicly pressed his former boss to undertake more market-friendly structural reforms. In campaigning for the Élysée Palace, he vows to lower corporate taxes and corporate social security contributions; to loosen rigid labor laws; and to cut public spending. But his ability to deliver won’t be clear until parliamentary elections in June. Macron says many fresh faces are flocking to his nascent “En Marche” party as viable candidates who can produce a legislative majority, yet it’s surely going to prove a tall task. A power-sharing “cohabitation” with a prime minister from another party, perhaps the Republicans, is certainly possible, which could constrain Macron’s room for maneuver.

Still, none of the presidential candidates ran on continuity with the status quo, which is reflected in Hollande’s mid-single-digit approval rating and the rejection of establishment presidential candidates. That suggests Macron may find broader parliamentary support for reforms, regardless of party, with observers drawing parallels to Germany’s 2003 structural reform program, or Sweden’s tax, deregulation and welfare system reforms over the last two decades.

Whatever the potential for reform in France, where both annual inflation and economic growth have been running around 1% and unemployment has been stuck at roughly 10% since 2012, there’s scope for accelerating economic growth and a market reflation across the broader continent. Indeed, cyclical momentum appears greater in Europe than it does in the U.S.

On the economic front, Eurozone unemployment has been gradually, if steadily falling for four years, while headline inflation, despite a recent dip, has been rising toward the 2% target since last May, and actually hit it in February. The European Commission’s economic sentiment measure for April hit a near- decade high. And in March, the European Central Bank (ECB), which at its latest monetary policy meeting stood pat on its key refinancing rate of zero and deposit rate of negative 0.4%, is forecasting Eurozone GDP growth this year rising to 1.8%. Purchasing managers index (PMI) data, a widely followed indicator of economic health, are at a six-year high, in contrast to recently receding PMI data in the U.S. And the Citi Economic Surprise Index, which measures data surprises relative to expectations, has also been positive of late, and is trending in stark contrast to recent U.S. index readings. 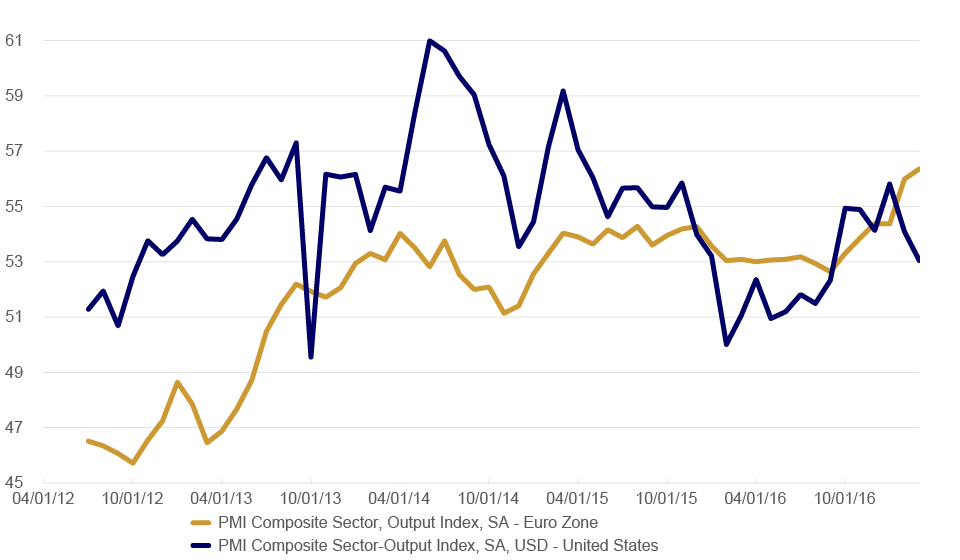 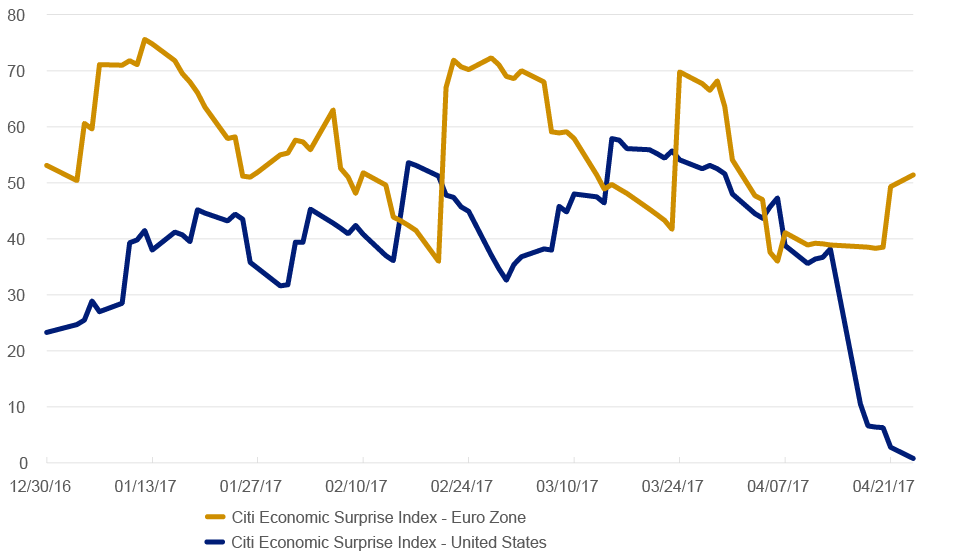 In terms of valuations, European equities also appear to have far more upside than U.S. stocks on the whole. The 10-year annualized total return in the S&P 500 Index amounts to about 7%, versus just 0.65% in the EURO STOXX 50 Index, creating a relative performance differential of more than six points. And while U.S. earnings are running at cycle peaks, European earnings are still far from them. The forward price/earnings multiple of the EURO STOXX 50 amounts 15.3x, below its 16.8x peak two years ago, and clearly less than the S&P 500 Index’s 17.5x level.

To be sure, European equity price/earnings multiples historically trade a few points below those of U.S. stocks. Nonetheless, net equity portfolio inflows in Europe have been running positive since mid-March, according to BofA Merrill Lynch, a trend that’s also reflected in its latest Global Fund Manager Survey. The rotation underway in April from U.S. to European stocks is the fifth largest since 1999, with allocation to Eurozone equities rising to a 15-month high. That makes Europe “the most favored” region globally among those managers polled, according to BofA Merrill Lynch. A record $280 billion equity ETF flow differential favoring the U.S. over Europe since February of last year also appears to be at an inflection point, according to UBS.

European stocks are also generally more levered to emerging markets than their U.S. peers. With the International Monetary Fund projecting an acceleration of emerging markets growth to 4.5% this year and 4.8% in 2018, such exposure certainly doesn’t hurt.

Political and macroeconomic risks haven’t, of course, disappeared. Macron, if he does win, may be hobbled by the next parliament. German elections are still ahead this year, and Italian elections are likely in 2018. A messy “Brexit” divorce could also create adverse fallout for both sides of the English Channel. But investors are no doubt counting on the ECB to provide a monetary back-stop against such risks. ECB chief Mario Draghi, while trumpeting accelerating European growth, made clear at the bank’s April monetary policy meeting that the ECB isn’t even discussing an exit strategy from its quantitative easing program while growth in wages remains sub-optimal and core inflation is still tepid. An ECB-induced “taper-tantrum” doesn’t seem likely near-term.

With economic and earnings growth on the upswing in Europe, along with attractive relative valuations, bargains on a stock-by-stock basis can certainly still be found across the Old Continent, particularly in France and the Southern Periphery, or on a sector basis, among financials, utilities, capital goods producers and infrastructure companies. On a day-by-day view, business fundamentals of world-class companies don’t usually change because new occupants take over presidential palaces. But elections sure can create attractive pricing on their stocks.

The performance data quoted represents past performance; it does not guarantee future results.

Indices do not take into account fees and expenses. Investors cannot make direct investments in an index.