Report from Turkey: Cheap Asset Prices May Not Be Cheap Enough

Since we originally published this post, troubles in Turkey’s capital market have turned into a financial crisis that has started to ripple across emerging markets, even though the country’s problems are largely home-grown. Developing world economic fundamentals are much stronger nowadays, as U.S. Federal Reserve Chairman Jerome Powell pointed out a few months ago, and should be able to handle higher U.S. rates and a stronger dollar. Nonetheless, the market has started to zero in on Turkey’s turmoil. Over the last three weeks, the MSCI Turkey Index cratered another 32%, Turkey’s 10-year government bond yield soared nearly five more percentage points to 22.69%, and the lira lost another 31% of its value against the dollar.

On August 13, President Recep Erdogan said Turkey was “under siege” by the “bullies of the global system,” apparently referring to the U.S. Yet the analysis below better explains the forces buffeting Turkey. Its relevance has increased following Erdogan’s declaration that neither higher domestic benchmark interest rates nor a bailout from abroad are in the cards.
– August 14, 2018

Turkish asset prices have plummeted this year, bringing their valuations to historically low levels. That presents potentially attractive opportunities to investors looking for quality stocks at bargain-basement prices. Yet some selloffs don’t necessarily end with stocks and bonds at oversold levels if their prices largely reflect current or near-term risks, both company specific and macroeconomic.

Thornburg Portfolio Manager Charles Wilson, PhD recently returned from a research trip to Turkey, where stocks, government bonds and the lira plunged further July 24 after the central bank defied market expectations and stood pat on its key rate, rather than raise it. Written shortly before the latest central bank inaction, this excerpt from Wilson’s report to Thornburg’s investment team focuses on the country’s macroeconomic conditions and policy challenges, which appear to be intensifying amid growing concerns about the monetary authority’s independence and unorthodox policy approach. Stock-specific commentary is omitted as investment research on individual companies continues.

The MSCI Turkey index fell 45% in U.S. dollar terms from highs reached last fall to mid-July. At a forward 12-month price/earnings of 5.8x, the market is trading at the lowest multiple ever outside the 2009 Global Financial Crisis. Most of the banks and some of the highest-quality conglomerates are trading near 0.5x price/book. For what it’s worth, Brazil and Russia reached similar valuations during the 2015 selloff before rebounding sharply. But that’s not to suggest we’re at an inflection point in Turkish asset prices. The Eurasian country’s political and economic evolution suggests that monetary and fiscal policy distortions may continue. 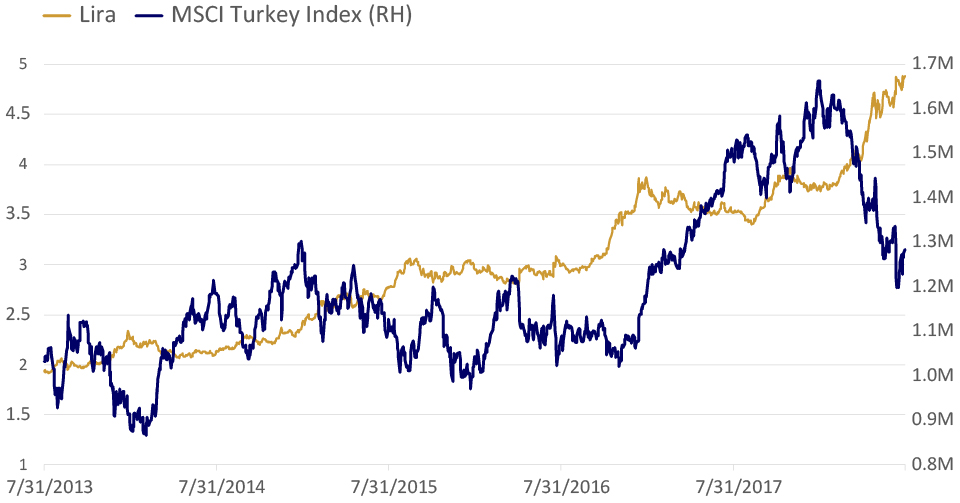 Recep Tayyip Erdogan established the AK Party in 2001 and two years later was elected prime minister, a post he held for the next 11 years. Erdogan became president in 2014. Following a 2017 referendum to amend the constitution, many of the powers held by the prime minister were transferred to the presidency, and the office of the prime minister was abolished. Last month, he was reelected president in early elections. Over the last few years, free speech and academic freedom have been curtailed, protestors jailed, and norms separating religion and state weakened. Critics say Erdogan has consolidated power in the executive branch and eroded the independence of the judicial branch and the central bank. He recently raised eyebrows again by appointing his son-in-law, Berat Albayrak, as Treasury and Finance Minister.

As the U.S. dollar has strengthened this year, the Central Bank of the Republic of Turkey (CBRT) has been constrained in raising interest rates preemptively to counter spiraling inflation, precipitating a sharp slide in the lira. The currency had fallen nearly 20% when, on May 23, the CBRT set a 150-basis-point band above and below its key monetary policy tool, the one-week repo auction rate, and announced a hike in the rate of 125 bps to 17.75%. Most economists expect the central bank will raise the repo rate another 100 bps on July 24, but we’ll see, given Erdogan’s criticism of policy tightening.

The lira has weakened about 8% from early June despite the central bank moves. Markets remain concerned that the central bank is behind the curve. Annual consumer inflation rose to 15.4% in June, which is three times the official target, from 12.1% in May. Inflation is now overwhelming economic growth, which has averaged about 5% since the global financial crisis with some periods well over 7%. But demographics are favorable with nearly a quarter of the population less than 24 years of age. At the government and household levels, debt-to-GDP ratios remain low by global standards at 30% and 17%, respectively. In fact, government debt has fallen about 15% since the Financial Crisis. The fiscal deficit is a reasonable 1.5% to 2% but growing quickly. 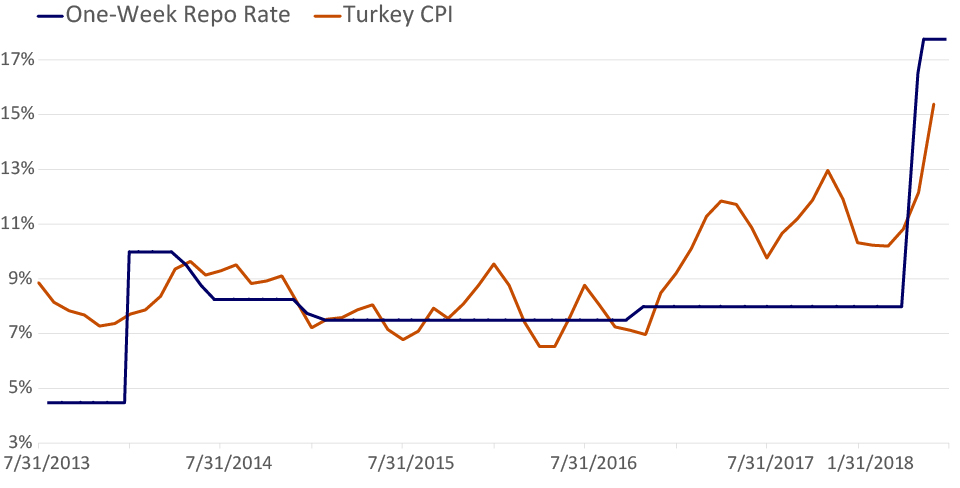 The persistent negative headwind is the current account deficit, which is running around 6.3% of GDP and has averaged 5% over the last 10 years. About half that is from energy imports and the rest is consumption-driven imports. In the past when energy prices dropped, the deficit would fall to near zero. The International Monetary Fund’s view is that Turkey has been growing well above potential due to expansionary monetary and fiscal policy, fueling excess consumption, increasing household leverage, and persistently high inflation.

The answer seems simple. Raise interest rates, cancel the credit guarantee schemes targeting small- and medium-sized enterprises, and reduce fiscal spending. This would cut the fiscal and current account deficits, support the currency, and slow inflation. However, Erdogan argues that restraining interest rates would support growth, and curb inflation through the supply-side response. And supporting growth is the most important role the government plays, he adds, estimating potential GDP at closer to 7%. That is almost double the IMF’s 3.5%. to 4%. He seems to believe high interest rates drive inflation as market participants reprice the higher cost of money into goods and services. The flip side of that view is the lower-quality investment that artificially restrained interest rates encourage. All this leaves the market uncertain about the direction of monetary and fiscal policy. As a result, investors could force adjustments by voting with their wallets.

What would that look like? Additional currency weakness would likely close the current account deficit but dampen foreign wholesale funding of the banking system. Today, about 25% of systemwide funding comes from issuance of bonds denominated in U.S. dollars or euros. Such issuance was nearly zero a decade ago and has been a major driver of growing household debt. Over the last decade, loan-to-deposit ratios have climbed from roughly 90% to 120%, mainly due to loan growth of 15% to 20% outpacing deposit growth of 10% to 15%. The external wholesale funding has plugged the gap. The stock of existing foreign currency funding has been hedged through swaps and would not be vulnerable in the event of a crisis. However, incremental funding at reasonable prices could be a challenge if the market becomes too concerned with the outlook for the lira, inflation and economic growth. The banking system would be forced to slow lending and tighten financial conditions even if the central bank were not intervening.

The upshot is the economy is poised to slow. Either the central bank raises rates further and fiscal spending declines, or the market tightens financial conditions for policy makers. Turkey acting proactively and properly sequencing the needed measures would clearly be preferable to the market forcing the adjustments.