After Falling Back to Earth, Emerging Markets Ready to Take off Again

Following sky-high returns in 2017, hopes ran high that emerging market equities could continue their climb in 2018. Although their ascent briefly accelerated into last January, performance sputtered and developing world stocks fell back to earth. The asset class ended 2018 down 15%, plummeting 24% from the first-quarter peak. That brought returns so far this decade to an anemic annualized 2.4%.

Investors are asking if they should be more optimistic from here. After all, from its early 1988 inception through the end of last year, the MSCI Emerging Markets Index has returned 9.7% per year, just ahead of the MSCI USA’s 9.3%, and about double the MSCI EAFE Index’s 4.9% gains in the period. Both the short-term overhangs as well as the current catalysts are worth consideration, as the entry point now provides a good margin of safety for those with longer investment horizons.

Emerging Markets in 2018: What Went Wrong

Emerging markets entered 2018 with strong momentum after an exceptional run in 2017 and a strong 2016. Index-level valuations were slightly elevated compared to history but more attractive versus most developed market indices, especially U.S. stocks. Many analysts were also still revising emerging market earnings expectations higher, which led many to believe the stocks were cheaper than headline numbers were suggesting at the time.

In addition to good valuations and earnings momentum, global economic growth was expected to accelerate last year, which has traditionally been a good omen for emerging market stocks. Most economists were increasingly constructive based on a recovery in emerging market growth as well as a step-up in the U.S.’s expansion, which was driven by tax cuts, deregulation, and a recovery in fixed investment. Strong global growth, rising earnings expectations, and attractive multiples have historically been a good setup for global equities in general and emerging market stocks in particular. But not this time. 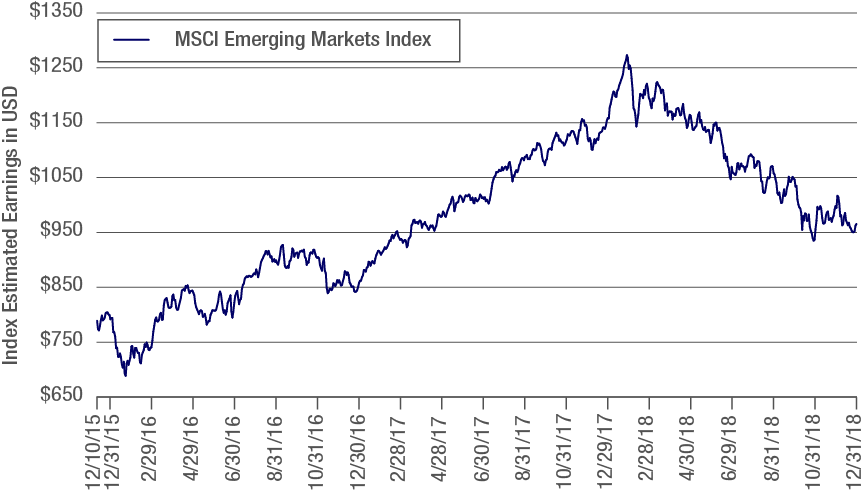 Late last January, strong U.S. economic data spurred fears that the U.S. Federal Reserve would tighten monetary policy more than previously expected, lifting the dollar. The impact was initially felt by countries that most needed external funding, such as Argentina, Brazil, and Turkey. But the strengthening greenback eventually impacted most emerging markets by undercutting local earnings when translated back into dollars. It also forced many domestic central banks to raise interest rates to defend local currencies, counter imported inflation, and in some cases reduce current account deficits.  The result was weaker economic and profit growth as well as negative earnings revisions. As the U.S.–China trade dispute intensified in the second half of 2018, negative emerging market sentiment spread.

Less Turbulence Ahead? 2019 and Beyond

If the stronger dollar and trade dispute kicked off the correction in emerging market equities, the question now is whether those factors will be reversed, and if other catalysts for a rebound factor into the equation. On the latter point, low multiples, low expectations, and growing earnings typically make for a good investment climate in emerging market equities. Earnings expectations are now considerably more attractive than they were a year ago. At the index level, the forward 12-month price/earnings multiple has compressed 17% from its year-ago level. The de-rate was broad-based with lower multiples seen across all sectors, with consumer discretionary, healthcare, technology, and materials the hardest hit. Looking forward, emerging market earnings are expected to grow close to 10% this year and next. Given the low starting point, positive revisions and faster growth in many sectors are likely.

While earnings and valuations are supportive, they alone are not enough to drive the market higher without some of the broader concerns around trade and dollar strength abating. As we recently wrote in a #whitepaper on the Chinese economy, the Middle Kingdom’s growth has slowed. But at an expected 6.3% this year, it remains robust given its size—at more than $12 trillion. Beijing’s 2017 deleveraging campaign proved a drag on growth last year. But the stimulating impact of recently enacted lower domestic benchmark interest rates, reductions in banks’ reserve requirement ratio, cuts in corporate and personal income tax rates, and more tax deductions, should all combine to keep growth buoyant.

Perhaps more importantly, by turning to supply-side reforms to stimulate domestic consumption and private investment, resource allocation should prove more efficient and overall growth more sustainable. As the world’s second-largest economy, the importance of China’s reforms stretches far outside its borders. And beyond its contribution to world economic growth, China is also a major driver for global risk sentiment. Importantly, stabilization of Chinese growth would boost the differential between U.S. and emerging markets growth rates. Consensus forecasts put U.S. growth ebbing to 2.6% this year from an estimated 2.9% in 2018, while emerging markets are slated to expand 4.9% in 2019, about in line with a preliminary 5% pace last year. A widening growth differential is usually a good precursor for flows into emerging markets more broadly. 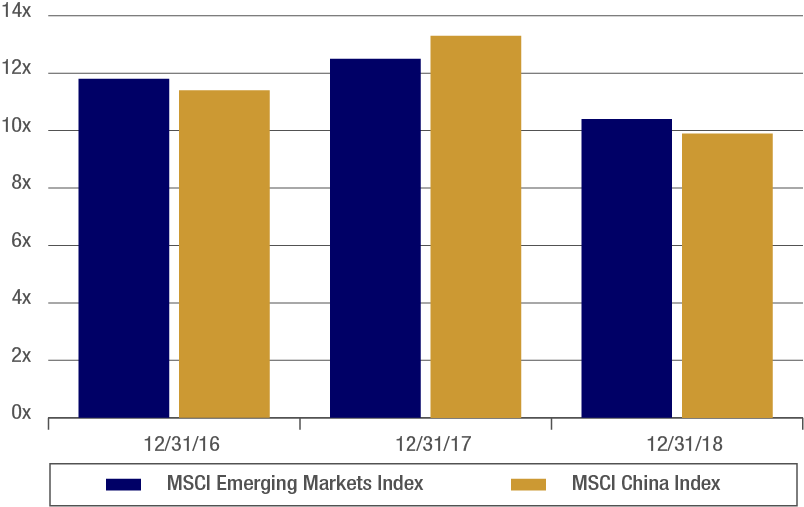 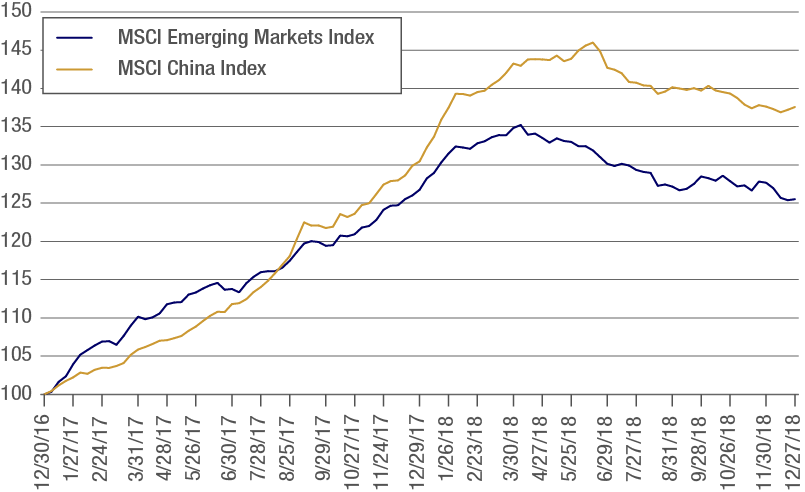 Source: Bloomberg. Indexed to 100 (based on consensus estimates)

Will the dollar once again undercut emerging markets? The greenback is difficult to predict, especially in very short periods such as the next 12 months. However, with the Fed’s 250 basis points in interest rate increases and a $500 billion reduction in its balance sheet, we are very likely closer to the end than the beginning of its tightening cycle. To be sure, Fed communications have generated confusion in recent months, amplifying market volatility. Nevertheless, we believe near-term headline inflation pressures are to the downside, given the fall in energy prices and the magnitude of the tightening cycle to date. This likely leads the Fed to assume a more cautious stance going forward. It’s notable that the dollar index has retreated 2% from its 52-week high in mid-November, while the MSCI EM Index is up nearly 3% in the same period. 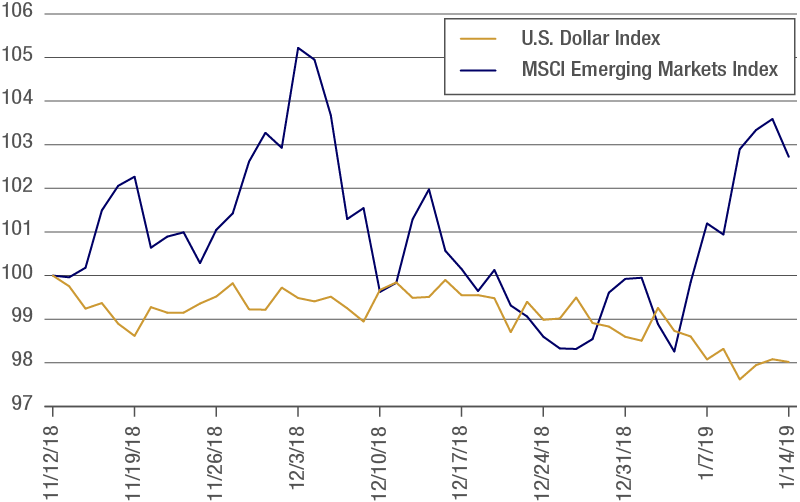 While the current investment case for emerging markets is broadly favorable, the asset class is far from efficient. Political and economic risks vary sharply across emerging markets. For example, contrary to conventional wisdom, only a handful of developing countries are net energy exporters and materially profit from higher crude prices, while the vast majority benefit from lower oil prices, particularly in Asia. Some are quite indebted and have vulnerable current account gaps, while others are in far better fiscal shape and have manageable liabilities. The quality of companies within each emerging market also varies dramatically; some are world class, from Asian tech companies, to India’s top refining and consumer services conglomerate, to Brazilian banks and soft commodities producers. Others are decidedly not. And a number, like diamonds in the rough, are in the early stages of potentially becoming great companies.

To anticipate the strongest beneficiaries of improving sentiment in emerging markets, the hardest hit in the recent past are always a good starting point. China stands out on this metric with the market falling 17% during the last six months of 2018. That correction was deeper than the 16% drop of the MSCI Turkey Index, which was undercut by political turmoil. Other areas of weakness included Korea, where chip makers were hit by the dip in global demand for smart phones and a drop in orders from enterprise clients. Mexico has stumbled over concerns about the agenda of its new president, though our on-going assessment suggests an ideological bent that is, however, tempered by pragmatism.

From a sector perspective, technology, consumer discretionary, and health care were the weakest areas coming out of 2018, though we also see much potential upside in industrials and financials. A rebound in select Chinese technology and consumer discretionary stocks could materialize after they were the most impacted by concerns about slowing domestic demand and the trade friction. We would also expect Brazilian equities to perform well if Brasília continues to push fiscal and privatization reforms. Argentina could also be a bright spot if steps taken last year to balance the fiscal budget and stabilize the currency taken last year prove effective at reining in inflation.

With a less muscular dollar and still favorable global growth backdrop, emerging markets could recover far more than they lost in 2018. In addition to the now benign backdrop, long-term structural drivers also factor into the equation. The penetration of goods and services in emerging markets remains low, and billions of people in them aspire to middle-class lifestyles. A new wave of government reforms should boost productivity and growth in several major emerging markets, including China, Brazil, India, Argentina and parts of Southeast Asia. Highly select investments in these and other emerging markets can protect on the downside and potentially deliver meaningfully on the upside over the medium term.